Arsenal’s 3-2 loss to Olympiacos marked a low-point in an indifferent start to the season for the Gunners.

It was an XI that should have carried the team to victory, but some slack defending, an unlucky deflection and a David Ospina howler meant that Arsenal could fail to qualify from the Champions League group stage since before I was born (joking, I’m not that young).

Wenger very prickly afterwards. I guess no-one likes to be quizzed on their mistakes. Ospina was a howler. Cech was fit to play. No excuses.

But does Ospina deserve all of that grief? Did Wenger truly ‘lose the plot’? Did Arsenal’s performance even deserve that much vitriolic criticism?

The likes of John Cross were quick to lambast Wenger for keeping Petr Cech (ignoring the fact that he may have been carrying an injury and was criticizied for his two mistakes versus West Ham United on opening day, but why get into specifics?), Arsenal’s only signing this past Summer, on the bench in a must-win game.

Having arrived from OGC Nice just last year, Ospina has experienced a very interesting stay in England. His performances have typically been very good, and aside from being poor in the losses to Tottenham Hotspurs (poor handling), Monaco (dove late for the 3rd goal) and Swansea (Bafetimbi Gomis’ shot should have been saved) Ospina’s stats speak for themselves:

Of those 17 goals, two of them (Dusan Tadic in the League Cup and Jordan Henderson in the PL) were penalties. John Cross (and other media types) can revise history all they want, but Ospina is a quality goalkeeper, and Wenger’s decision to give him playing time at home to Olympiacos cannot be held against him. Indeed, Ospina conceded twice against Zagreb too, but the first goal was an unfortunate deflected own-goal by Oxlade-Chamberlain after Ospina made a terrific save.

Let’s dive deeper. ‘Expected Goals’ is an advanced metric that uses an algorithm and data from Opta to decide how many Expected Goals (or xG) a team should have scored with average finishing from the number and quality of shots they took. This metric takes into account the distance of shot from goal, speed of the attack, whether the shot was a header or kick, etc. It’s a very good metric that more accurately communicates a player’s involvement than just goals and assists. Using this metric, we can flip it and evaluate goalkeepers and see how the number of goals they concede compares with amount of xG teams have created against them.

Using this method, Opta found that David Ospina isn’t *just* good, but actually one of the best goalkeepers they have data on! 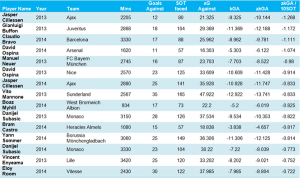 Opta analyzed the 2013/14 and 2014/15 seasons to see which goalkeepers excelled using this method, and found that Ospina’s 14/15 season with Arsenal (league-only) was the 4th-best performance, while his 13/14 season with Nice was the 6th-best performance! That’s not just good, but phenomenal. He *should* have conceded ~16 goals in the league, but only allowed 11. The only other goalkeepers that come up more than once in the top-15 are Monaco’s Danijel Subasic and Ajax’s Jasper Cillessen.

Ospina gets criticized for his height (it’s been proven that height isn’t actually that important as long as you’re not as small as Messi or Alexis) and his handling (fair enough), but at the end of the day the only thing that matters is if he keeps the ball out of the back of the net, and he does that very well.

Now, did he make a mistake against Olympiacos? Absolutely. Is that the only reason Arsenal lost? No, Arsenal had the better of the chances but Olympiacos scored the all-important first goal via deflection and caught Arsenal’s entire back-line napping for the third. Arsenal had 11 shots inside the box, while Olympiacos could only muster three.

xG map for Arsenal-Olympiakos. I know this is unusual, but xG thinks Arsenal created better chances and still lost. pic.twitter.com/r74GwP1D2k

The team’s mentality, respect for their opponent and preperation have all been in question, but sometimes you’re just unlucky. Teams don’t tend to score 3 goals from 4 shots on target, as Wenger highlighted, so it’s harsh to rebuke a team that limited the other team to mostly speculative shots outside of the box.

Alas, the result now leaves Arsenal with zero points from two games and in need of a win against the in-form Bavarian giants. Wenger is once-again under-pressure, but we’ve seen him lead the team to the promised land from far more precarious positions. It will be a hell of a ride, I promise you that.