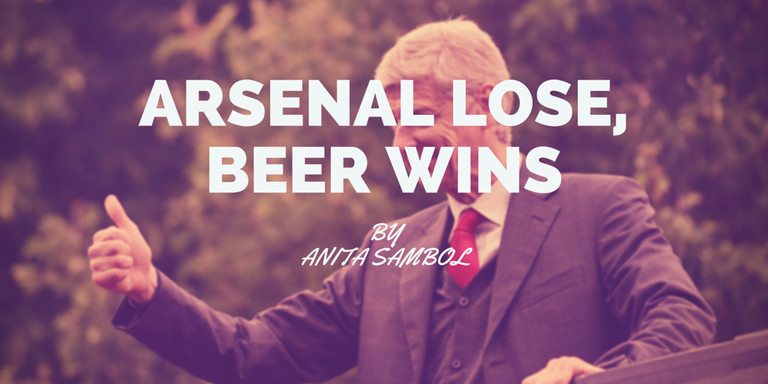 Yes. I saw my Arsenal live for the first time ever. And yes, they lost. But, Gooners are the best people out there, and it was the best day ever. Let me tell you more about it. I’m still excited.

I really dislike Dinamo, but I was supporting them in Champions League qualifying rounds, just because there was always the possibility they’d end up in group with us. Sure, they once played Arsenal in last round of qualifiers but I was “too young” according to my caring mother so didn’t go. This season, when Dinamo were drawn against that Albanian club (that wears our kit from last season), I got the feeling it’s going to happen. I was sure Dinamo will get through, and was praying for us to get them in group.

And, we did. The number of congratulations I got on Twitter on that glorious day (best UEFA draw ever)! People immediately started offering to get me tickets; I was amazed, but it was just the beginning.

Not half an hour after the draw, I notified my boss I’d be taking two days off whenever we play in Zagreb. He was very understanding because he knows how much I obsess over Arsenal (I wear my kits to work). Why two days? I don’t live in Zagreb, it’s 70km away from me and I wanted the full experience. The room was also secured – my boyfriend’s sister Lucija (who is important for this story!) studies in Zagreb, so she had a spare bed for us two. Yes, of course I took my Manchester United supporting boyfriend Nikola with me. People liked him, don’t worry.

All we needed now was the tickets. Like I said, many people were offering to buy and mail them to me. We could have gotten tickets from the Arsenal Croatia supporters club but, since I had a chance to get some from England, I let other Croatian gooners have “my” tickets. Eventually, my dear friends Lucy and Greg got us the tickets. Greg was even kind enough to meet up with Lucy at the Stoke match to collect her ticket so we don’t have to stress out if the mailman will deliver them in time.

Guys, I can’t thank you both enough. I’m so happy that we know each other. I’m even happier to have a great boss here at Daily Cannon who offers the best bonuses ever. Cheers, Lee!!

So, the tickets were done, now I just needed to wait. Time was passing so slowly, with me getting more and more excited every day. Which kit should I wear? Shall I drink or stay sober to remember it all? How will my English be?! Will I be as shy as usual in ‘real life’? Will my phone die and I won’t be able to take photos? All big problems, you know.

We decided to go to Zagreb on Tuesday night and catch the Manchester United match with Gooners somewhere. What a great idea it was! After some issues during the trip to Zagreb, we finally got to the pub right before the match. I finally got to meet Greg, Mags, Sean and Tim. Even an Italian Gooner named Andrea, and so many more Gooners whose names I don’t know. We sat down, had quite a few beers and watched the match. My boyfriend wore his United kit and suffered some light “abuse”, but it was just friendly banter.

Most of them were shocked with our beer prices, which is key information for this diary, as you can tell from the title. From what we learned, beer here is 3 times cheaper than in England. For example, the most expensive beer we had in this 2 days was 22 kuna, that’s 2 pounds, for half a litre. You know what that means – drink, drink, drink. We were amazed how much Gooners can drink and still be nice!

We drank a bit too much but everything was amazing. We got home after the pub closing time, naturally.

We agreed with Greg, Mags and Sean to show them around Zagreb on Wednesday. Since Lucija lives there, she knows all the cool places, she was our tour guide. After meeting up at noon, our first pub break was 20 minutes later. The weather was amazing, 28°C the whole afternoon, sun shining bright, Englishmen certainly enjoyed it. We walked around the town, visited the Botanical gardens, saw some old buildings, had a lot of pub breaks and found a lot places where there should definitely be a pub.

They loved the town, and the beers, and the locals. Locals liked them all since they were leaving really generous tips! We don’t have that custom here in Croatia, so waiters enjoyed it and of course they let us put up our flags in the middle of Zagreb. We took a lot of photos, which I still don’t have so I’m sharing just some I managed to took while also saving my battery for later. We drank beer, had local food (ćevapi!) and ended up in a pub with other Gooners.

Now, that’s when things started to get crazy. We put on our kits, even Nikola had an Aresnal kit on! Crazy, I know, he loves me. In that pub there was maybe 40-50 Gooners, singing all the time, drinking, flags, beers and Jagerbombs everywhere.

It was fantastic. I spent a lot of time just looking around! Then a rumor appeared that you need to have a passport to enter the stadium. People slightly freaked out and were asking around, but Lucija, my boyfriend’s sister, talked to the police, they talked to the stadium and the problem was solved – no need for passports whatsoever.

Since I mentioned Lucija, she wasn’t supposed to stay with us, she doesn’t care about football and doesn’t watch it at all. But, she loved it so much, the people, the drinking, and they loved her, so she ended up drawing a fake cannon tattoo on her arm, Greg got her a ticket for the match and by the end of the night she had her own chant from our group (Lucy is a Gooner!). I tell you, Gooners are simply the best.

Anyway, we spent an hour or two at that pub when we all went to meet up with the rest of the Gooners – Croatians, Macedonians, Slovenians, Bosnians, Serbians etc. The meet up was right above the main square, with even more cheap beer and chanting. Of course the pirate Bully was there, and Arsenal Fan TV. Even Thierry Henry was walking around the town and taking photos with people, but we missed him.

The party was awesome. So many red and yellow shirts, everyone was so friendly, and I met even more people I talk to online. That’s when I filmed the Kosicleny chant which ended up everywhere online. Isn’t it amazing?? I still haven’t gotten it out of my head, and I don’t plan to. Don’t mind my accent when singing, I was speaking cockney by the end of the night!

Then finally, it was time to go to the stadium. We were supposed to take the tram together. Naturally, people were drunk and chanting, and many locals didn’t like it. Two trams passed us by and didn’t even stop.

The third one stopped, and ended up driving for just five minutes! Gooners were chanting inside and jumping up and down, so we had to get out and walk to the stadium. Luckily, it wasn’t that far away, a 15 minute walk. We had police patrols next to us all the time. It was even kinda nice to walk, cleared our heads a bit for the #@*! performance that was waiting for us in the stadium. When entering, there were no problems at all. Well, Nikola did have to blow into a breathalyser, but they let him in!

I won’t talk much about the match. You know it all. It was really bad. We were chanting, Dinamo fans were chanting, there was moaning, cursing. I spent more time looking around (again) than on the pitch, and even better. The result was awful, I hate that they didn’t win my first match, but the events before and after make it bearable.

After the match we had to wait for half an hour in the stadium, as always. After that, we had to wait in front of the stadium as well, just for a few minutes. People were getting nervous, but there were no problems. We thought them how to say ‘that c word’ in Croatia so they chanted it to the police, that was fun! When they finally let us go, we grabbed a tram and went for “just one beer”. Yeah. Right.

I have no idea what time we went back to our apartment. I have no idea how Greg, Mags and Sean got to the plane the next morning.

We went to the same pub as earlier that day. We even made them drink our Croatian spirit called rakija. They didn’t take it very well but no one was sick! We got to know each other more, found out what is football life, and had a few more pub stops along the way. I haven’t had so much to drink in years. It was awesome. Lucija and I spent whole walk home talking English, annoying the hell out of my boyfriend who was barely walking anyway.

The next morning I woke up feeling so good, surprisingly. I was barely hungover, just singing the Koscielny chant and remembering all the amazing things that happened last night. Nikola, however, was barely alive though. We packed our bags and got on the bus home.

Everyone was texting me thinking I’d be sad cause of the result, but I really wasn’t. It’s not like we lost to a weaker opponent for the first time. But I did hang out with Gooners for the first time, I’ve never spoken so much English before, and I got to see my team live, no matter how bad they were.

I was in the same stadium as Mesut Özil, Alexis Sánchez, Arsène! How cool is that?? I’ll never forget it.

Once again, a HUGE thank you to Lee, Lucy and Greg for the tickets, all the Gooners who were buying alcohol and food, and everyone who was in the away stand. I had an amazing day, I am even tempted to use hashtag gooner family, that’s how much I liked everyone I met. May we play Dinamo every season. (With a better result!)