Five goals scored, five conceded and only ten points from the opening six games of the season, it goes without saying that fans were uneasy about Arsenal’s early-season form in front of goal.

The goalscoring nadir reached an all-time banterous low (high?) when Mathieu Flamini became the club’s top-scorer (in his first appearance of the season) with a Messi-esque double against Tottenham Hotspurs in the midweek FA Cup game.

Olivier Giroud continues to be called a lamp post and Theo Walcott’s credentials as a striker are constantly in question, but most disappointing has been Alexis Sanchez. Having stormed the Premier League last season like the Americans landing on the beaches of Normandy, it’s become increasingly frustrating to see Alexis scuff shots, lose possession 40 yards from goal (who does he think he is, Alex Oxlade-Chamberlain?) and ultimately let the team down. But has he been poor? Let’s investigate.

Arsenal, as a whole, have been roundly derided as poor on offense this season, but that couldn’t be further from the truth. Goals may win games, but they aren’t the ultimate measure of attacking play. Sunderland came into the weekend (they lost 3-0 away to Manchester United) having scored one more goal than Arsenal, but there’s no explanatory power behind just looking at the goals column.

Here are Arsenal’s shots on target this season: 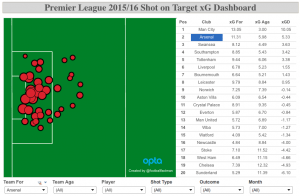 And here are Sunderland’s: 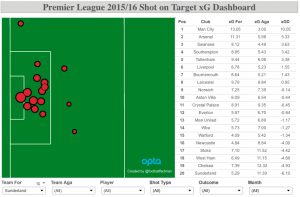 Sunderland obviously aren’t a team Arsenal should be comparing themselves to, but this is just to show how goal stats this early on can mislead.

Well, it’s impossible to know “why”, though that hasn’t stopped people from calling Giroud and Walcott all sorts of names, but it’s certainly better to create a glut of great chances and not score than to not create chances and not score. Variance, bad luck and small sample sizes makes diagnosing Arsenal’s malaise in front of goal difficult, but the signs were positive, and the goals finally came against Leicester City on Saturday in a 5-2 victory.

xG map for #LCFC–#AFC. Arsenal's confidence returned. It could never have been predicted. pic.twitter.com/wQZdX0SrMt

Alexis Sanchez finally broke his duck on Saturday, taking his frustration out on the Foxes with a sumptuous hat-trick. The first was a nice, late run to finish off a nice move by Mesut Ozil, Hector Bellerin and Walcott.

The second was gorgeous header, leaping like a salmon to finish off a transcendent chipped-pass from Ozil.

The last was the cherry on top, a lovely dink taking Alexis past N’Golo Kante and into space before unleashing a rasping, dipping shot from 25-yards. He was back.

Except he never left. He leads the league in shots in the 6-yard box (six), total shots (38) and 2nd in shots in the penalty area (22, only Graziano Pelle has more with 30). He may look a little fatigued, his dribbling and industry haven’t caught the eye as much this season and Arsenal’s play has suffered for it, but he is still getting in good positions. It was only a matter of time.

Finishing comes and goes, confidence wanes and soars, and Arsene Wenger is keenly aware of that. Le Professeur understood that the team’s overwhelming shot statistics weren’t just random pops from distance, but smart attempts close to goal. He kept faith, and it paid off on Saturday.

Mathieu Flamini is no longer Arsenal’s top-scorer. The banter era is over, again.