Proper football is back!

And what a game we have coming up.

Welcoming Liverpool to the Emirates on Saturday, Arsenal will be looking to put an end to the Scousers Champions League hopes for another season with a win to take them nine points clear.

Arsenal have yet to win a game this season after an international break, drawing two (Manchester City and Hull, both 2-2) and losing one (Manchester United) so a win is by no means a formality, even given Arsenal’s great form before the interlull.

So, how are we likely to see the side lineup?

In goal David Ospina will keep his place while in front of him the backline will most likely be Hector Bellerin, Laurent Koscielny and Nacho Monreal. Will Wenger opt for Gabriel or Per? It’s hard to tell and as neither played any minutes over the break so both will be well rested.

Francis Coquelin will sit in front of them and I would expect Santi Cazorla and Aaron Ramsey to join him in midfield.

With Danny Welbeck facing a late fitness text and the Ox ruled out with his hamstring problem, Mesut Ozil, Alexis Sanchez and Oliver Giroud should complete the lineup with Walcott on the bench once again.

Of course, trying to predict an Arsene Wenger starting XI is like trying to pick the winning lottery numbers, but Welbeck’s knee tweak makes things slightly easier this week. 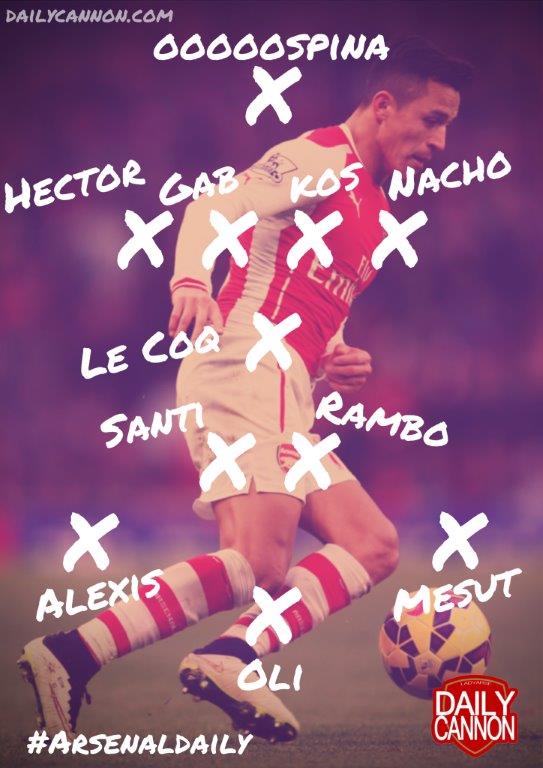 Position change may not be one-off hints Mikel Arteta

Aubameyang to start: How Arsenal could line up vs Slavia Prague