But, when used correctly, they can add colour to a tale.

Arsenal fans need no colour to know that their side were woeful against Monaco in the Champions League on Wednesday night.

Witnessing one of the side’s worst performances in recent memory, it was clear to everyone watching.

After the game Dimitar Berbatov said that they wanted it more than Arsenal, but I’m not sure that was the case.

If it was, you’d see that they had more interceptions, blocks, tackles etc.

Arsenal win all those categories.

Arsenal had more corners, shots in total, and blocked shots. They were better at tackling, passing and keeping the ball than their opponents. They won more aerial duels (19 v 16) and throw-ins (26-14) and dribbled more (28 v 9)

I don’t think you’ll find anyone who thinks that Monaco came to the Emirates, played out of their skins and left with a well-deserved victory.

Sure, Arsenal deserved to lose, but that is very different to Monaco deserving to win.

Arsenal handed the victory to them on a plate, and, just to be sure, hung around in case they needed their mouth wiped afterwards. 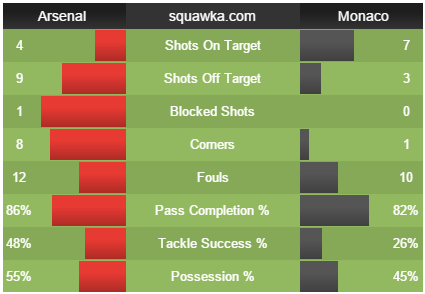