The following is an attempt at something that has never been written on an Arsenal website, or indeed said by anyone who holds the Gunners close to heart.

In fact, it’s such a contrary statement, I’m using this first paragraph to kill for time so that I can build a nuclear bomb-proof shelter to hide in whilst you read this, in anticipation of the fury that is about to be launched at me.

Losing to Tottenham last week was a good thing.

If you somehow haven’t called me a moron and decided to hear me out on this, here’s why having to see our bitter rivals get one over us will be worth the pain come May. First, here’s the Premier League table as it stands right now:

As it stands, we are in the midst of an unholy scrap for third and fourth, with only five points separating third and Spurs in seventh. And I know what you’re saying right now:

“If we had beaten them, we’d be third, nine points clear of Spurs. How is the gap being smaller a good thing, you dipstick???????”

Well, if we had taken the three points at White Hart Lane, then it would have been safe to assume that the only teams capable of finishing third or fourth would be either us, Manchester United or Southampton, but after seeing the last two performances, do you have any confidence in us putting together a run of victories and building a gap between us and the rest? Because I don’t.

I think we’re going to need as much help as possible from other teams taking points off Southampton and United in order to get at least fourth this year.

And this is where Tottenham, and Liverpool, will come in handy. 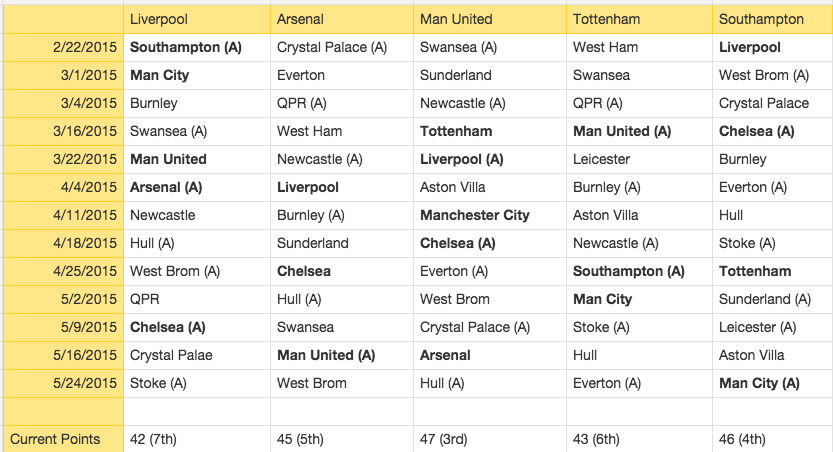 As it stands, our run-in is the easiest of the five.

But have a look at Man United’s games after they play Newcastle away.

Wouldn’t it be great if both Spurs and Liverpool were still fighting for fourth by the middle of March?

That spell of games ending with a trip to Stamford Bridge has “dropped points” written all over it.

Again, I know the counter-argument to this: “Why wouldn’t either Spurs or Liverpool be motivated to win those games anyway?”

If Liverpool and Spurs were six and nine points behind us respectively, then to achieve their goal of Champions League qualification, what would be the better option; to play your strongest team in the League and hope everyone else slips up, or rest your best players and concentrate on trying to win the Europa League and the Champions League spot that comes with it?

If your answer depends on who is still in the Europa League, then here’s the 32 teams still involved:

Not the strongest competition in the world, is it?

If Arsenal was in this draw, I’d make us favourites to win it.

So you couldn’t blame Spurs, Liverpool, or even Everton for thinking that they’ve got at least a decent chance of winning it.

But now that they’re also in with a chance of finishing fourth in the league, they’re going to start running into some serious fixture scheduling headaches.

Playing Sunday, Thursday, Sunday, Thursday is far from ideal, especially when both clubs only have one good striker to rely on and can’t afford to rotate their squads too much without becoming significantly worse.

The good thing about this for Arsenal is that these problems shouldn’t really effect them until the later stages of the Europa League, when both fatigue and the easier path presented by the Europa League should force both clubs to prioritize Thursdays ahead of Sundays, leading to dropped points in the league, eventually leaving us with two less rivals to worry about.

So we need those two teams to be in with a shout of finishing fourth for as long as possible, so that they put out strong teams against United and Southampton, in the knowledge that they won’t be able to do that at the tail end of the season.

Trust me, I don’t like saying it either, but because of where we stand right now, it’s going to be unbelievably close for fourth this year, and every advantage that we can gain may be crucial, especially with our own inability to put a string of wins together.

It stinks now, but it just might happen to work out, that the key to us qualifying for the Champions League next year, was losing to Tottenham.