When Anita Sambol agreed to be part of FIFA’s Fan Movement for the World Cup this summer, she never imagined she’d end the tournament watching her home country in the final at the Luzhniki Stadium. Here, over four parts, she tells her extraordinary tale.

We woke up a bit earlier on the day of the World Cup final. The freaking world cup final! Can you believe it?

As the hotel breakfast was ridiculously expensive, we decided to take a stroll around our block and check nearby a shopping centre for some food. It turns out our block was pretty fun and very sports-oriented.

Just next to our hotel was CSKA Sports Museum, an extremely socialist-looking building, and massive in size. On the other side, a 10-minute walk away, was Dynamo’s stadium, still being built but already looking amazing. The Spartak stadium was also nearby but we didn’t get to see because of a lack of time.

The Dynamo stadium and all the new buildings – and there were a lot of them – are really trying to be different to the socialist architecture throughout the city. They are curvy, colourful, full of glass rather than concrete, and remind  you of London, New York and other big Western cities. It’s amazing to see the contrast in the architecture in the city, and that’s just one more thing that makes it a really great destination to visit.

After breakfast – which turned into lunch – we got back to the hotel and put our Croatia gear on.

We were greeted with smiles wherever we went!

The Uber driver who was taking us to the stadium was super fun. We were stopped by the police – they were pulling over almost every taxi driver on that day – and while he was waiting for them to clear his papers, he insisted we take a selfie! He was super happy to be taking Croatian fans to the match. He didn’t speak English but we managed to understand what he wanted, and he emailed us the photos too!

We arrived at the stadium a early so decided to visit the FIFA Fan Fest. Well, we didn’t really decide – I misread a message from FIFA and thought we should meet there! It was on the other side of the stadium complex, over the river, so we walked there and took a short bus ride. We got directions from one of the really nice volunteers, who did his best to explain in English but we had to ask him to try in Russian which we understood much better than his broken English. It’s good to be Slavic in Russia!

FIFA Fan Fest was near the Moscow State University building which is one of the “Seven Sisters” – Seven almost identical skyscrapers built by Stalin to show Westerners that Moscow, too, has skyscrapers. They are all stunning and can be seen all around town.

The Fan Fest was fun, there were lots of people there, just strolling around, drinking beer, buying souvenirs and taking photos with us! We literally couldn’t walk for 10 metres without someone asking for a photo! It was so weird and fun, but we got a bit annoyed because we couldn’t even finish our beer! But we still took photos of course.

Right about then I realised I got the message wrong and we had to run back to the stadium to meet with the FIFA people. I was due to film an interview and talk about all of this I’m writing here, so we had to hurry.

On the way, we ran into Croatian fans and walked with them. There were so many people around, going to the stadium and to the Fan Fest – that’s when you actually realised it’s a massive event in a huge city. Before that, we hadn’t really run into a big crowd or a traffic jam, it was just normal big city situations.

We finally got to the stadium and met up with Nikola’s cousins who came to see the match as we’d helped them get tickets. That’s when the security measures came into action once again.

Nikola wasn’t allowed to bring his backpack in the circle of the stadium which wasn’t an issue as they had special storage rooms for that – you got a number, location and everything and just had to come pick it up after the match. Pretty brilliant if you ask me.

You could leave backpacks, luggage – anything. I was allowed to bring my handbag with me, after several scanners and checks, of course! 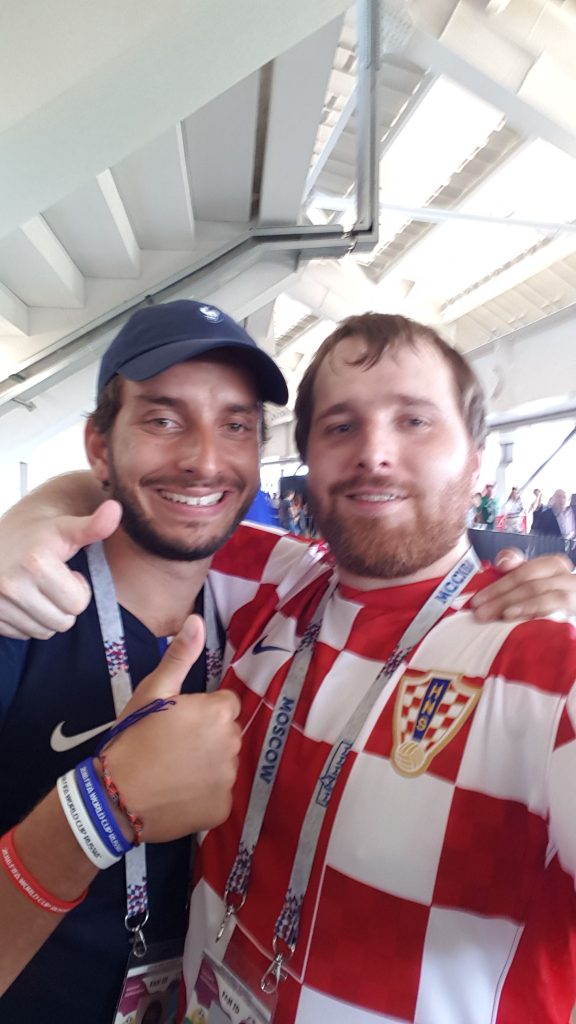 We finally met up with the FIFA people at the Lenin statue in front of the stadium. I gave an awkward interview – I’m very shy in person but did my best! And we were off to the stands.

Our seats were all the way up at Level 6, first row, so we had a fantastic view but a long climb up! There, we filmed a few more snaps for FIFA to use in their digital campaigns, and waited for the match to start.

I taught a few Fan Movement people how to chant in Croatian, which was awesome because everyone was cheering for us.

While walking to our seats, I noticed a guy in an Arsenal kit with Overmars written on his back. A minute later, I saw he was siting next to a guy with a Manchester United kit on so naturally we had to go and take photos!

I won’t talk about the match too much. It still hurts because we had them, we should have won. Ah.

The viewing experience was amazing. We were close to French fans so we heard them more than Croatians but they looked amazing and we were singing whenever we heard them – even starting our own chants with Colombians and Mexicans.

At halftime, Nikola went to get a beer and could barely get back in time for the restart. We didn’t realise but there was a Chinese movie star seated two seats from us. There was a bunch of Chinese people taking photos of him during halftime and he gave an interview too, it was madness! Nikola finished half of his beer before he got back to his seat.

The match, man, I said I won’t talk about it but I have to.

It was hard to watch France score with every shot as we were the better team without making proper chances,. We bossed the midfield, looking great without that final touch and shot. I am still mad at Perišić for missing that chance at the end of first half, and at Subašić for not moving for any of the goals.

We were so sad when it ended, it was not nice to watch French celebrate while our guys were crying. It started raining as soon as Croatia were about to get their silver medals so I joked that the sky was crying because we should have gotten the gold.

Our president was a hit in stands, but don’t get me started on that!

After the match, still all sad and half drunk, we left the stadium without talking, just like most other Croatian fans. There was some chanting, which we happily joined, but most of the walk from stadium to the bag pickup room was quiet and just a mix of sad and angry.

You know how that goes, we all are Arsenal fans, weve experienced that a lot, sadly.

Although the whole Moscow experience was fantastic and a once in a lifetime adventure, I’d still swap it for a Croatia win, just like Luka Modrić would swap his (well deserved) Golden Ball for a gold medal.

We met up with friends from Croatia in a pub a few metro stations away from the stadium, for a nice hamburger and a few craft beers.

Of course the match was discussed, and everyone was mostly sad and angry and tired.

We didn’t stay for too long, and Uber drove us back home to the hotel.

Look out for Part 4 at the same time on Wednesday night! Read Part 1 here, Part 2 here.

Gunners must add more if they’re to compete

Miguel Azeez unlikely to go on loan this season

Arsenal still interested in Barcelona 32yo despite withdrawing from bidding