Arsenal are reportedly set to complete the signings of Lyon striker, Alexandre Lacazette, and Leicester’s Riyad Mahrez this week.

Lacazette, who scored 37 goals in 45 appearances last season and has been linked with the Gunners since last summer, is allegedly going to set Arsenal back €60m (£52m), while Mahrez is set to cost around £35m.

Lacazette is thought to be signing a five-year deal after Lyon president Jean-Michel Aulas, who’s pretty much become an ITK Twitter account, revealed that an agreement had been come to while also denying that Olivier Giroud was involved in a swap deal with the 26-year-old. 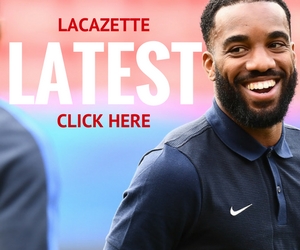 It’s heavily rumoured that the France international’s medical will take place on Tuesday or Wednesday this week with an announcement to follow.

Mahrez, on the other hand, has been told he can join Arsenal this summer, with the BBC’s Dale O’Donnell claiming that a deal will happen this week.