Per Mertesacker has revealed that he is currently in talks with Arsenal over a new role on the ‘operational’ side of things with the club keen to keep him but that his playing days are almost at an end.

UPDATE: Mertesacker has clarified his comments

Admitting that he can no longer play every three days, the BFG told Sport 1 in Germany, “I was extremely lucky with my career, and I want to let it end.

“I am motivated, but I can not play any more every three days. I do not want to overrun my luck.” 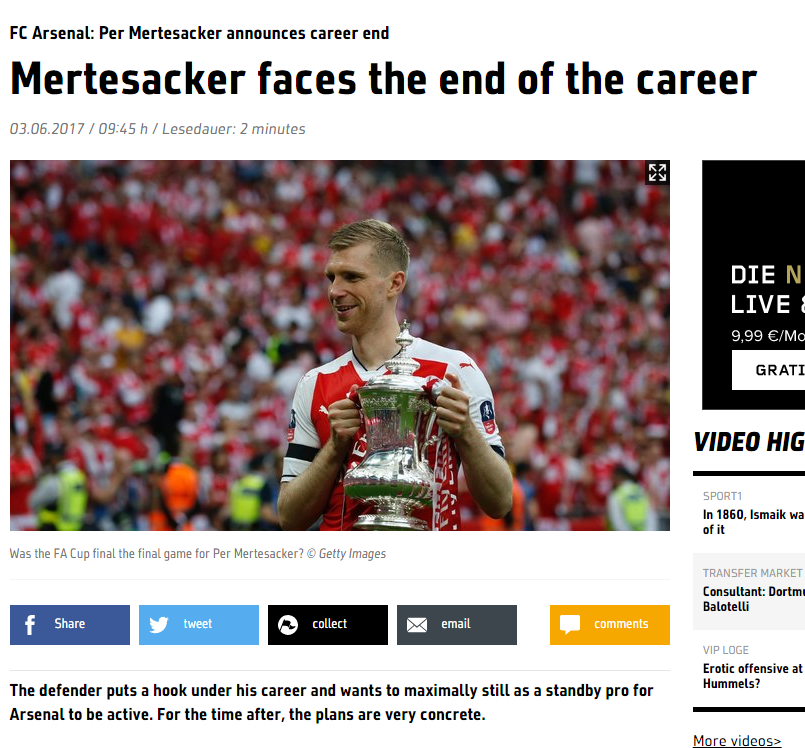 Mertesacker confirmed to the German publication that he would like to be a ‘stand-by pro’ for Arsenal but added,  “I told him [Wenger] I was tired, mentally drained I’ve been thinking of my career, it’s nothing to do, I’m going to lose. I did not care how I’d trained, I did not get a chance.

After winning the FA Cup, Mertesacker saw that could be a highlight to end his playing career. “It was so with the national team with the World Cup title, that you can be replaced as a player, so I cannot stand anybody in the way.

“Arsenal wants to keep me, as there are already talks, it will be in the operational business, I will be on the other side.”

Per also refused to rule out becoming a coach.

Arsenal exercised the option on Metresacker’s contract to keep him as a player for one more season but if these comments are anything to go by, we won’t see him playing and his heroic cup final performance will be his last in an Arsenal shirt – unless we end up with no fit centrebacks.

At the end of next season, his days, even as a standby, will be over.