If Stan Kroenke was in any doubt how Arsenal fans feel about the club, he was given a big reminder on Friday night as thousands protested outside the club, but Josh Kroenke’s comments show they are still very far from understanding things properly. 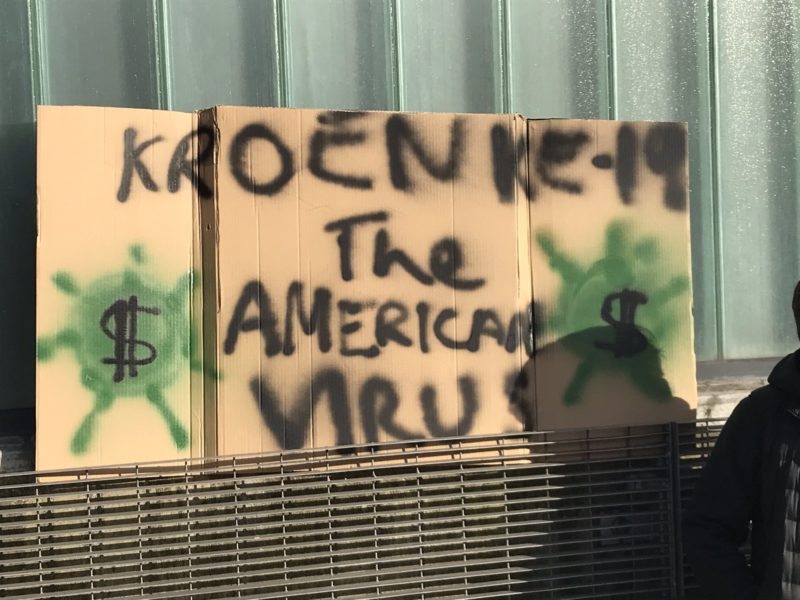 I love Arsenal. I have loved Arsenal since I was 10 and a school trip from Belfast saw us given a guided tour around Highbury. Coming from a place where everybody supported Manchester United or Liverpool, Arsenal captured my heart that day. It felt right even more than supporting those others had felt wrong.

Through my love for the club, I’ve been able to set up this site and earn a modest living from it. I’ve made friends, real-world tangible friends I can actually reach out and touch, with their consent of course. I’ve been on holiday with people I met through our love of this stupid clubs, watched others meet and marry and produce little Gooners. We’ve mourned the loss of people we never met in the real world but spoke to almost every day online. It gave me a community and a sense of belonging during the worst years of my life and something to cling to when the nights got extra dark.

To those who get it, football has never just been 22 men on a pitch kicking lumps out of a ball and each other. It is about friendships and rivalries, hopes and dreams and disappointments, all shared with people who wanted the same thing.

It is our tribe.

People don’t like it when you fuck with their tribe.

Those days are changing, as things tend to do. Some will put up with it, others will eventually come to forget there was ever anything different, and others will walk away. New members will arrive to take their place in the tribe and values will shift just a little for everybody.

Football at the top level is no longer about the people and the community, those days had their cards marked the moment the Premier League arrived. From that day football became a product to be sold back to the very people who had supported the clubs when nobody else gave a toss.

It wasn’t Sheikh Mansour bouncing around the divisions with Manchester City, nor Roman Abramovich watching his club almost cease to exist.

Arsene Wenger tried to warn us, but we wanted what they had. We wanted the shiny singings to gloat to our mates about, we wanted the best players to give us the best chance of winning the best trophies.

As one big football supporting tribe, we need to look at the role we have played in all this, moreso if you are a supporter of one of the club’s who has turned everything on its head when all we wanted to do was moan about being crap against Fulham.

Many of us have come to see spending as the only way to improve because so much money is spent it elsewhere, is impossible to improve enough to keep up with everybody else who is spending if you don’t spend. Spend, spend, spend.

We also act like the Premier League and Champions League are tournaments based on nothing more than meritocracy, the top are at the top because they are the best. You aren’t supposed to ask how they got to become the best. How some were allowed to spend millions upon millions they never earned while most others weren’t.

You’re not supposed to talk about the league champions from all around Europe who face every obstacle possible to reach the promised land of the Champions League group stages because UEFA would rather have the fourth best sides from a load of ‘better’ countries instead.

No, don’t mention that, just focus on how unfair all this is, what is happening now. Never mind what happened to cause it.

Actions no longer have to have consequences, that’s cancel culture don’t you know.

Maybe you missed the memo.

When Josh Kroenke turned up at the Arsenal fans’ forum earlier this week, his comments were incredibly telling.

After saying ‘what is worse – a Super League or a Super League without Arsenal’, Josh Kroenke said, “The second question was ‘what do the fans want?’. We tried to answer that question in many ways as possible” – None of those ways involved actually asking fans what they wanted.

He admitted the past week had been eye-opening for him, but should it have been? Shouldn’t he know his ‘consumers’ a little better?

“I think from an English fans’ perspective, this is what was so educating to me over the last 24 or 48 hours, going back 36 hours now – sorry this has been kind of a blur of a week, I haven’t slept much,” Kroenke said. “For the English fan they want to see more big matches, but as one Chelsea supporter wrote on a sign I saw online the other day – you still want your cold nights in Stoke. To me that sent a strong message that the EPL, football in the UK as a whole and the fan sentiment in England.

“We got it wrong and that’s why we’re here today apologising and to discuss with you. That doesn’t mean a lot of our concerns and frustrations weren’t addressed or we don’t still have those concerns. None of our intentions as part of this project were to harm the Premier League or English football in any way.

“Really, most of our frustrations resided in larger conversations about European football as a whole. You’ve heard us talk primarily about the stability of the football pyramid and that is generally what we were trying to accomplish when we were part of these conversations in recent weeks.”

From that, note how he says ‘the English fan’ as if they are somehow different to Arsenal fans around the world when this week has shown that not to be the case. Global fans were no more onboard with this Super League nonsense than the thousands of locals who turned up at the Emirates on Friday night.

Also note how he talks about the ‘stability of the football pyramid’. Football isn’t meant to be ‘stable’. That’s the whole fecking point. Arsenal are were they are now because of decisions made on and off the pitch over the last decade. There is no god-given right to be part of a stable ecosystem. If he means the lack of stability at the bottom because of the money situation, the answer is to give them more money, not ringfence more of it from their reach.

Arsenal have no more right to a place at the top table than Wigan and that’s another thing the Kroenkes need to understand.