I’ve not always believed that Pierre-Emerick Aubameyang was the best choice for club captain but on Sunday against Chelsea, the forward led by example for the whole match.

As well as scoring Arsenal’s goal, his 13th in the league and 15 overall, he was a key figure in leading the Arsenal press and helping his side defend.

As this graphic from the Daily Telegraph clearly shows, he gave far more for Mikel Arteta against Chelsea than he ever gave for Unai Emery this season: 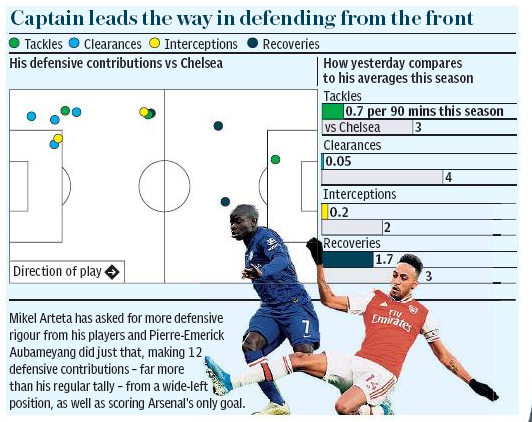 It’s also interesting to note that the graphic from the Telegraph states that Arteta has asked for ‘more defensive rigour from his players’ but that was something Unai Emery was also supposed to be demanding.

In fact, wasn’t that why Mesut Ozil was dropped? Because he wasn’t working hard enough defensively?

Arsenal 22yo ruled out for 2+ months after surgery

Spurs forward a doubt for Arsenal after international injury