Unai Emery has reportedly cut Arsenal’s live scouting of opposition in favour of videos that he watches himself.

According to an exclusive by Matt Hughes in Tuesday’s Daily Mail, Arsenal reviewed their scouting systems in-depth last summer and Emery made the decision that they no longer needed scouts to watch the opposition play and report back with their analysis.

With many clubs watching opponents closely for up to two months before a fixture, utilising a large network of scouts, Emery informed everybody that he’d rather watch some videos himself rather than read any reports compiled for him.

We can clearly see how well that is working on the pitch, having failed to beat Southampton, Leicester, Vitoria, Wolves, Liverpool (twice), Palace, Sheffield United, Manchester United, Watford, and Spurs already this season.

Arsenal have won eight games since the new season kicked off, only four of which have been in the Premier League where they have a negative goals difference.

Hughes highlights “an example of his [Emery’s] prodigious workrate” by explaining that “the Spaniard spends hours watching recordings of Arsenal’s forthcoming opponents on his laptop, although some at the club are convinced his time would be better spent addressing the weaknesses in his own side.” 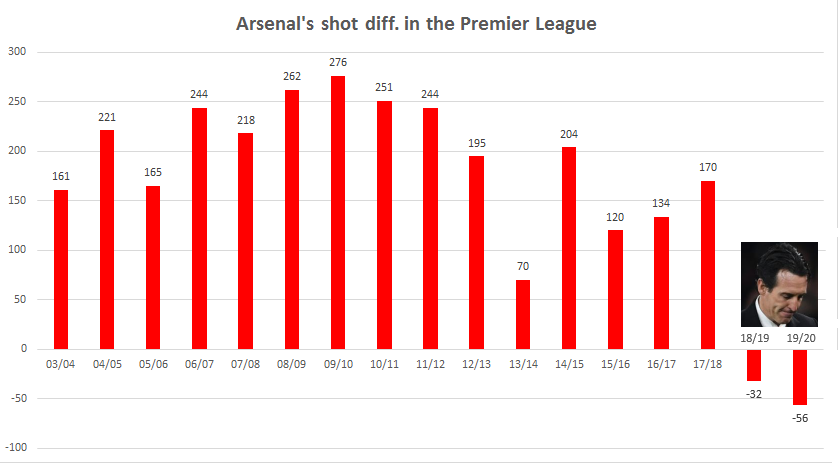 Hughes also adds, “Other senior figures have also argued that by relying on videos and data rather than eyewitness accounts, certain aspects of opponents’ strengths and weaknesses are being missed.

“While changes to the scouting set-up are not regarded as the main reason for the club’s downturn in form, sources insist they have been a factor in poor preparation for games, which have featured numerous basic defensive mistakes and a failure to anticipate opposition tactics.”

Regardless of what we think, Emery is expected to be in charge for Thursday’s game against Frankfurt with David Ornstein delivering an update on Monday.