Arsenal are back in the Champions League for the first time since the 2013/14 season and will be hoping to go as far as possible in the competition starting with a tie against Fiorentina on Thursday night, so let’s take a look back at their rich history in the competition.

The Italian side has a few, well-known, quality players including our former defender, Janni Arnth who left during this transfer window. Fiorentina also have the Australian veteran Lisa de Vanna, as well as Italian forwards Illaria Mauro and Tatiana Bonetti. And let’s not forget the French player, Laura Agard, who was a runner-up in the tournament with Lyon in 2012/13.

Arsenal will be favourites to go through even if the UEFA rankings place them as the underdogs with Fiorentina in the seeded side in the draw.

Let’s have a look at the club’s history in the best blub competition in the world.

Eliminated in the quarter-finals by Birmingham (0-1, 0-2)

Shelley Kerr took a much-changed team from the one that qualified for the tournament in 2012 under Laura Harvey with more than a dozen players leaving during the winter window. It resulted in a quality mismatch due to the new recruits and a deserved defeat to Birmingham.

A 1-0 away defeat at St Andrews could have been overturned, but the overall lack of creativity and cohesion in a team that was only starting to gel led to a 2-0 defeat at the Hive.

Arsenal did a fantastic job to eliminate Turbine Potsdam in the Round of 16 but were beaten by the eventual winners Wolfsburg.  There is no shame in losing to a top German side and they certainly had a good tournament that year. As you can see below, the team was very different from the previous year.

The FA WSL season had started as a new summer league in April 2011 and was therefore only halfway through when the qualified teams were decided. Hence UEFA giving the FA special dispensation for one season.

Another elimination by a German side, who were dominant before Lyon took over and, again, another good tournament for the Gunners, falling short against top-level opponents. As a semi-pro side against full-time side, it was always a tough ask.

Arsenal played the UEFA WCL semi-finals with the FA WSL opener stupidly planned by the FA in between the two legs.

Arsenal defeated Chelsea 1-0 on a sandy pitch that ended up injuring Kim Little who subsequently missed the second leg.

Laura Harvey ended up starting 18-year-old Jordan Nobbs on the day instead of Kim Little. This was the day I ended up having lunch with three international managers at Nando’s

Arsenal lost the away game at Stade Gerland, conceding two similar goals to Swedish Legend Lotta Schelin but could have got back into the game early in the home tie when Nobbs hit the crossbar. Then the French side scored twice quickly and the game was done.

Again, another excellent performance, only falling short against a pro team full of stars who would end up winning it.

The tournament name changed from the UEFA Women’s Cup to the UEFA Women Champions League with the final now being played in the same city as the men’s final.

Another defeat by German hands with the away game ending up in a narrow 2-1 defeat that’s to 18-year-old Gilly Flaherty’s immense performance at the MSV arena. On that showing alone, and the games that followed, she should have been selected for England by Hope Powell as her level was much better that the players eventually picked.

We will never know why the former England manager never gave her a chance despite all her centre-back problems. Memories from that campaign include PAOK, away where I was put in the VIP section for my own safety as the home fans were not friendly, to say the least.

The food at the MSV Arena was excellent, as well, as I enjoyed a full meal with my friend thanks to the complimentary tickets given to us by the club.

The format was a bit different this year with two group stage qualification rounds before the quarter-finals. Arsenal entered the tournament in the second stage in the four team round robin played in Lyon against the home team, Neulengbach and Zurich.

They finished runners-up and drew Umea IK, the team they beat to win the tournament a couple of seasons earlier.  This was Vic Akers final season as the Arsenal manager and his final European game in charge ended up as a disaster.

The home game was a tight win 3-2 and we knew it would be hard task away in Sweden. It went from bad to worse very quickly. Bachmann and Marta put on a masterclass and Fahey at left-back could not contain them as the whole defence failed to manage the two pacey forwards.

They scored at the start of the game in the first minute, at the end of the first half in the 44th, and at the start of second half in the 46 the. Scoring three goals at crucial times killed any Arsenal hope and the fourth goal finished the game. Then, when we went 5-0 down, Vic Akers tried to combat the strikers pace by replacing Yvonne Tracy with… Faye White. A strange decision I still do not understand to this day and White promptly fouled Marta to give away a penalty scored by the opposition goalie to add insult to injury.

The trip back to the hotel and the flight back home was not a happy one.

Same format with two qualifying rounds and Arsenal entering at the second stage. The tournament was played at home against Bardolino, Neulenbach and Alma and we finished first with seven points. Arsenal were paired with Lyon, who were not the winning machine they are now.

Lyon were still up-and-coming and Arsenal came back with a credible 0-0 draw away from home. The home game was played in really bad weather with the coaches and players having to sit in the main stand due to the wind and rain.

Lyon went 1-0 up, Arsenal equalised quickly and took the lead before Lyon came back to make it 2-2.

Lyon were through with a draw but added a third on the break late in the game via  speedster, Elodie Thomis. This was the night the England men’s team were eliminated from the Euros by Croatia at Wembley Stadium resulting in Steve McLaren’s sacking and the headline “wally with a brolly”. 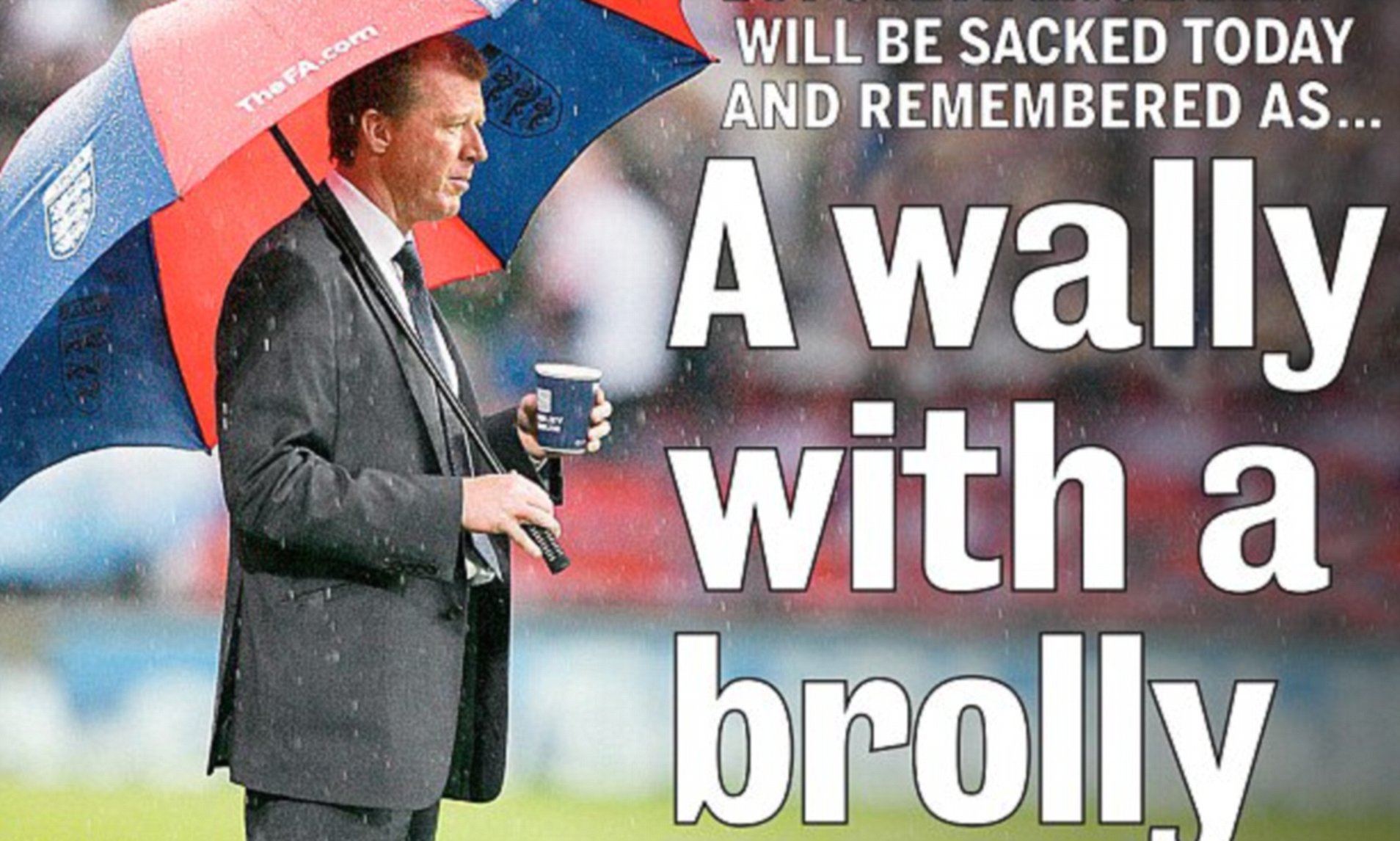 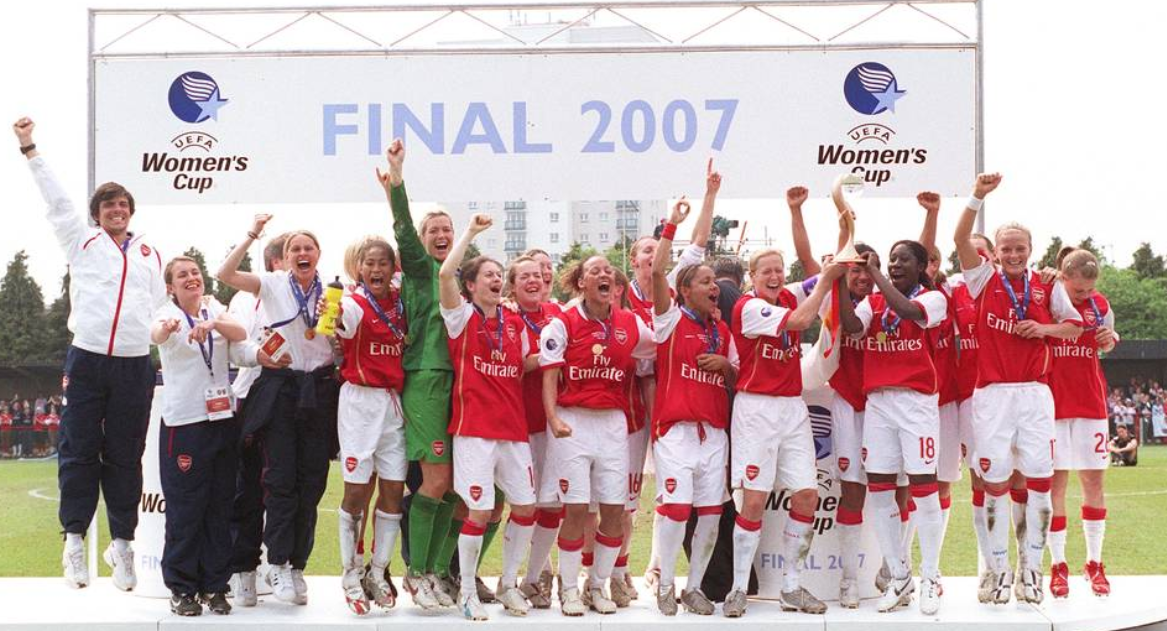 Alex Scott scored the winner away from home in what was the only goal of the tie:

That was also the unbeaten season with a record of P44 W42 D2 L0 resulting in six trophies. Not much more to add, is there?

After going through the second qualifying round against Brondby, Lada and Wroclaw, Arsenal were paired in the quarter-finals with the German giants and mutltiple winners, 1.FFC Frankfurt.

Due to many injuries, they had to put a defensive midfielder at left-back in Rachel McArthur and she had a tough time in both legs. Arsenal were lucky to get a home draw thanks to an excellent Lianne Sanderson strike but were outclassed in Germany 3-1.

Again, there is no shame in losing as a semi-pro team against a pro-side like Frankfurt as they were at the time. Arsenal gave a good account of themselves.

After going through the qualifying round and winning the group against Djurgarden, Athletic club and Aegina, Arsenal were drawn against … Djurgarden in the quarter-finals.

After a credible 1-1 draw away from home, a game I saw 5 minutes of because I went to the wrong ground in Stockholm. Sadly, Arsenal were defeated at home 1-0.

Arsenal went throught he second qualifying round beating Levante, Baku and Aalst. They beat Samara in the quarter-finals and were defeated 8-2 on aggregate by Hjorring which was a reflection of the gap at the time between women’s football in Scandinavia and in England.

For the first edition of the UEFA Women’s Cup, Arsenal won their qualifying round group against Bern, Worclaw and Tel Aviv and were drawn against the French champions in the quarter-finals.

They drew 1-1 at home with Ciara Grant on target. She was an attacking midfielder at the time and they lost 2-1 away from home after extra time. Ellen Maggs scored the goal to take the teams into extra-time.

Arsenal have a rich history in the competition and, hopefully, they can go back to reaching the final four or even better – the final in Vienna!