On Sunday afternoon the USA Women’s team became World Champions for the fourth time while their men’s team lost the Gold Cup final to Mexico a few hours later. Guess who gets paid more?

If there is a clearer example of the sexism in play in football than the USA national teams, I can’t think of it.

The women’s team has consistently been one of the best in the world, breaking and setting records, winning trophies and generally putting the country on the map as a global footballing force.

The men’s team, not so much.

In a recent lawsuit, members of the USWNT claimed their maximum salary in a typical year is $99,000 if they played 20 exhibition games. The men’s team would earn $263,320. 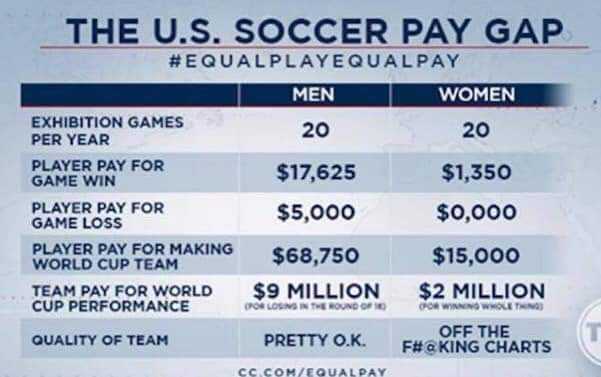 The men’s team, by comparison, came third in the World Cup once, got to the final of the Confederations Cup in 2009, has six CONCACAF Championships and Gold Cups, and a silver and bronze medal from the Olympics.

There is no debate to be had over which side is the more successful.

But have it we will.

People (misogynists mostly) will point to the larger support for men’s football but that’s an argument that falls down for a number of reasons, not all of which I’m going to go into now.

62,493 people attended the Mexico v USA final at Soldier Field in Chigaco, a home game for the States. The Women’s World Cup final saw a capacity 57,900 crowd at the Parc Olympique Lyonnais, almost 5,000 miles away from America. If the ground had been bigger, more would have attended.

In short, there is little you can point to to justify the disparity in pay between the men’s and women’s teams.

Well, nothing that stands up to any scrutiny and doesn’t make you sound like a sexist a-hole.

Read more: Dutch women’s national team to be paid as much as Dutch men by 2023