With the Premier League title set to be decided on the final day, the debate around the best ever finish to a league season has reignited once again.

There should be little debate that a match featuring the two teams that can win the title going head-to-head in the final game is the most exciting finish imaginable for a league and that’s exactly what we had in 1989 when Arsenal beat Liverpool.

This often gets forgotten because it was BPL (Before Premier League) but no matter how exciting Sunday turns out, I think we can all agree it would be even more exciting if Liverpool and City were playing each other.

So, it was nice to see some of the papers this weekend acknowledge Arsenal’s win in 1989 but that happiness was short lived.

Did you know that Arsenal ‘stole’ the title from Liverpool that year according to the Daily Mail?

Dominic King even admits in his piece that “Arsenal, who were trying to win the title for the first time since 1971, had been in control of the race before faltering on the run-in.”

Arsenal went into the final game of the season three points off top needing to win by two clear goals against league leaders Liverpool. Many believed they had no chance, and the Mirror published an article at the time, headlined “You haven’t got a prayer Arsenal.”

Lee Dixon spoke to Daily Cannon ahead of the 1989 film premiere in 2017, and explained: “That sort of stuff works in your favour. Graeme Souness did a piece saying “men against boys,” so we’re going to send him a DVD!

“In all honesty, everybody outside the club thought the same. There’s no way people 100% went “of course we’re going to win”, that’s a fan’s attitude.”

Amy Lawrence, the Arsenal writer and producer of the film, agreed that it felt like it was North London against the rest of the country, saying: “I distinctly remember on the coach everybody was reading all those tabloids, and it geed up the fans, never mind the players. There was this sense that everyone was against you.

“There was a real feeling that North London was alive to this thing. You felt like you were in an army going to war. Obviously, as fans you’re not doing anything except going, and praying, and trying to be part of it.

“But people who didn’t like football were wishing you good luck, patting you on the back as if you were part of something. So you didn’t feel you were going up for nothing.”

While all the attention from that season is focused on the final 90 minutes, Arsenal at one point had a 12-point lead over Liverpool. While Arsenal faltered, Liverpool went on an unbeaten run. 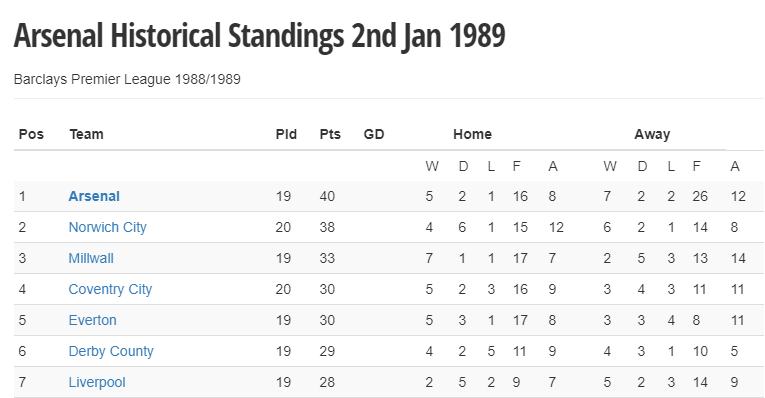 Had the Scousers won the title it would have been them stealing it from Arsenal.

It seems large parts of the press haven’t changed since that day in 1989.