This week, abuse aimed at women on social media came to the fore once again with the horrendous threats aimed at Chelsea’s Karen Carney making the headlines, but as this piece that we wrote earlier in the year shows, this is far from a new problem…

Judged solely on appearance, opinions scrutinised due to gender and a lack of support from male colleagues; women endure a lot in sports journalism, let alone on social media.

Muslim sports journalist, Shireen Ahmed, revealed to Daily Cannon how hard she had to work to gain the respect of colleagues and readers.

Despite being successful in her field and engaging listeners on feminist podcast Burn It All Down, Shireen believes she’s still held in lower regard by many due to her gender and religion.

“I have worked hard to take up space and demanded to be heard,” she said.

“But my platform is still small, and folks still expect me to know little. I like surprising them regularly.

“Society programs us to believe women are not experts or capable of intellectual leadership. This is very problematic. It’s not only my gender, but also my race and identity as a visible Muslim woman. The hijab makes people start thinking bizarre, racist things.”

Women are often met with resistance when getting into sports journalism, with paid work being harder to come by. This is something Shireen said she encountered in the early years, adding: “I wasn’t paid (at the start).

“There was a disinterest and a sense of expected free work, or that I am lucky to be getting amplified at all. That continues to this day.”

Women being told to be grateful for having a platform is certainly nothing new, and the downside to social media is the fact unwitting victims are hearing it on repeat.

Social media abuse goes much further than entitlement too. Women are judged on their race, appearance and almost everything except their opinion on a relevant topic.

Shireen revealed how bad it can get when so many launch unprovoked attacks for her being a Muslim journalist. “I get called every cuss word possible as well as generous sprinkles of gendered Islamophobic and xenophobic slurs. The most painful comments are ones about my children. Bar none.

“I will be sent racist and sexist tweets. I block people regularly. I also get emails via my website that are usually after I have published something.”

Arsenal fan, Stephanie Goldstein, gets her fair share of abusive comments too. Attacks from anonymous accounts about her Jewish heritage and appearance are something she’s forced to deal with on a daily basis.

“I try to take no notice, but when your looks get picked on quite regularly, it does start to have a negative effect on how you look at yourself,” Steph admitted. 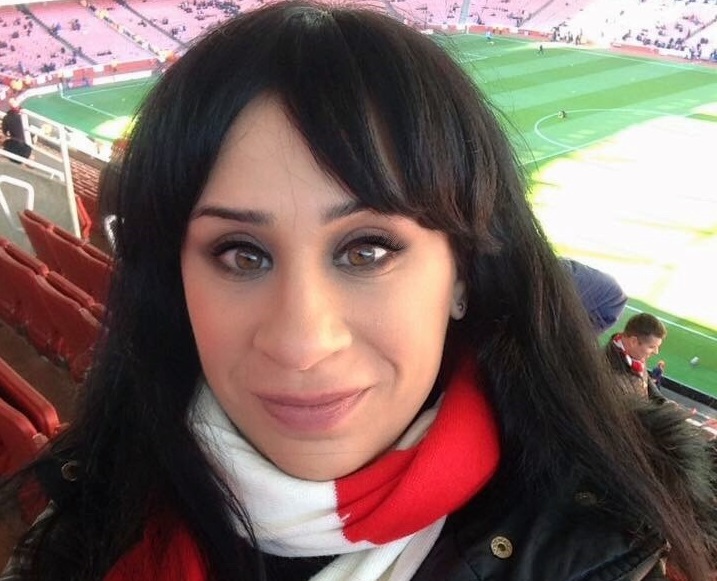 The Gunners season ticket holder revealed some of the comments that have been aimed at her recently: “Someone tweeted me out the blue and said ‘Alright Steph. With a hooter like that, how many rounds yer (sic) done?’

“I’ve had fans of Tottenham and West Ham saying my eyes are crossed and I needed to get them sorted. One even zoomed in on a previous profile picture so just my eyes showed, and tweeted it to me with 👀 emojis. One fan (has) said ‘Is your nose super imposed on?’,” she added.

“One I reached 10,000 followers on Twitter, someone said, ‘I put it down to a pretty face and cleavage click bait’. Then I get the usual ‘Why aren’t you in the kitchen or cleaning the bathroom?’ tweets.”

Steph feels Twitter could do a lot more to punish offenders, and is hoping stricter rules will be imposed for trolls in the future. “On the whole, the male followers I have seem to respect me for my football views.

“If I could police twitter, I would make the male and female fans who send abusive tweets be held accountable. If I reply to the abusive messages, they immediately delete them. If I report them, Twitter often say they didn’t find anything wrong. I think there needs to be stricter guidelines.”

The majority who send such abuse to women are men. There are, of course, many who don’t, never will and who defend those being abused. Shireen feels more can still be done by men, whom she says: “need to be accountable for the systems they benefit from.”

“I feel there are sincere allies out there, but as a whole, men do not do enough. Whether it is ignoring and not reporting abuse- or even going along with sexist jokes – which propel a culture of toxic misogyny – it is not OK.

“Men come forward after disclosure of abuse – not during it. And usually it’s after women have suffered incredibly. That is a huge problem.”

An avid Twitter user myself, I see women abused on a daily basis and little being done to stop it. Despite being so common, it takes a long time to get a reply after reporting an issue, and often the outcome is a warning – hardly a preventative measure.

Here’s hoping Twitter can clamp down hard on those who abuse others and make social media such a toxic environment to be a part of. We must do better and act when we see instances of abuse.

Does Each One of us Have a Talent?

Repairing the Ozone Layer also Reduces CO₂ in the Atmosphere

How Does a Smart Home Work?