The player and his teammates set off one of many ‘dual nationality’ discussions that took over the summer when they celebrated a Swiss goal with an Albania celebration against Serbia at the World Cup in Russia.

Joined by Stephan Lichtsteiner, Switzerland’s captain, (although now one of five captains which also includes Xhaka), at a press conference that also featured Xherdan Shaqiri, Johan Djourou, coach Vladimir Petkovic and national team delegate Claudio Sulser, Xhaka told reporters: “I’m sorry for what happened and I would be stupid if I said I’d do it again.

“I have only one passport, the Swiss one, and I wear the red coluors proudly. I will be eternally grateful to Petkovic for supporting me before the match against Serbia. You can not imagine how I felt before, the enormity of insults and hatred of which I had become the object.”

Over the summer, Xhaka hit out at the Swiss FA’s Secretary General after he ‘disappointed dual citizens’ with recent comments claiming that players should have to drop their second country to represent Switzerland.

Alex Miescher caused something of a stir when he claimed that players who had dual citizenship would not be as willing to fight until the end for Switzerland, suggesting they should bin their second country if they were opting to represent the Swiss.

“One might have to ask: do we want dual citizens?” Miescher said in interviews with Tages-Anzeiger.

“There should be a plan where players with several nationalities could be tied to the Swiss national team at an early stage. It’s an idea that has grown in me…The events with the double eagles have shown that there is a problem. 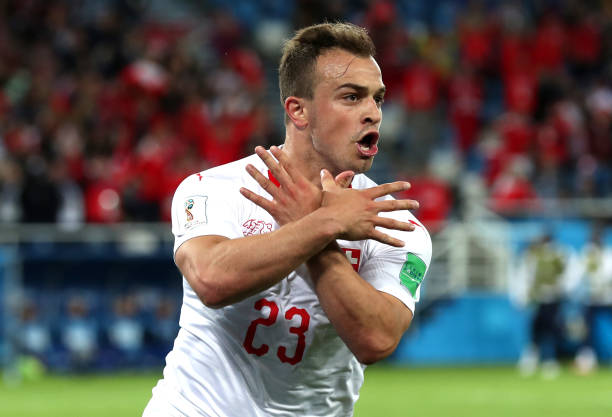 “We hear many promises. And then the player turns 21, and decides for another country because he sees greater chances for international appearances,” said Miescher.

“I find it shocking that we have no leverage there. Such a player has taken away a very valuable, expensive training place…Maybe we could say that the doors to funding programs are open only to junior players who do not have dual citizenship.”

He added: “Today, we benefit from the strength of our national team. But if Bosnia, Croatia, Albania and certain African countries were present at a future World Cup, we could have trained many players for other nations.”

“Even during the World Cup and after my double-headed eagle gesture, Alex Miescher approached us, assuring us that he would do anything to protect us – and then, three days after we left, such statements came from him,” Xhaka told Tagblatt.

“I hear from his lines that he does not trust double citizens to go to the borders for Switzerland. This goes directly to the address of me and a few others with two nationalities. It sounds to me as I said as if I and my colleagues in Swiss dress would not go to the limit.

“Three days after we have suffered a bitter defeat in Russia, you just do not do that.

“For me and certainly for affected teammates, it is strange to hear such comments from Alex Miescher. We are all Swiss and give our all for Swiss Nati – each of us – because we all know and are grateful for what Switzerland has done for us and our families. My family roots are in Kosovo – as they are for Breel Embolo in Cameroon, Manuel Akanji in Nigeria and Ricardo Rodriguez in Chile and Spain.

“The Swiss national team consists today anyway of 50 to 60 per cent double citizens or Secondos. Even our boss Vladimir Petkovic is a dual citizen and gives blood and sweat for the national team. With this unnecessary foray, Alex Miescher has caused a lot of frowns but also disappointed many.

The Swiss FA also distanced themselves from Miescher’s remarks.

In a statement, they said, “The Swiss Football Association (SFV) has never spoken out against multiple citizenships or dual citizenship status.

“The cited statements are from a one-hour conversation between SFV General Secretary Alex Miescher and journalists from the Neue Zürcher Zeitung and 20 Minuten / Tages-Anzeiger after the World Cup group matches in the restaurant of the Torpedo Stadium in Togliatti (Rus, site of Swiss Team Base Camps during the World Cup finals 2018).

“The SFV regrets that the impression arose that he was against dual citizens or multiple nationalities and was not correct or even discriminatory against double citizens in Switzerland.

“The most serious is that the focus is on footballers who are already playing for Switzerland. Currently, in particular, those footballers who have just returned to the World Cup in Russia for all of our country and before the SFV was always protective when there was debate about their identification.

“In the context of the SFV interest in the context mentioned two questions in particular: How can we better protect our national players from events such as the World Cup group match Serbia – Switzerland on 22 June 2018? And: How can we be even more concerned that junior top footballers with multiple nationalities, after cost-intensive funding by the SFV, only play for the A national team of Switzerland?

“These questions have been the subject of discussions in various sections of the SFV for years. Various ideas were discussed, including the possibility of examining adaptations of the relevant FIFA regulations or the idea of obliging players to join the national team at an early stage (for example, by contracting or renouncing multiple nationalities when recruiting or taking part) of young footballers in the SFV training programs). A corresponding decision was not made.

“The SFV wants to accompany players even better who play with U teams for titles for Switzerland, but then at 22 years are often exposed to considerable pressure because they are to play for another country – and possibly against Switzerland.

“The SFV still does not want to neglect the promotion and training of junior footballers who do not have a second country to choose from.

“The SFV continues to promote integration and inclusion at all levels.”

Although Xhaka has made no secret of his love and respect for Albania and Kosovo, without a second passport, the entire thing is moot. The Swiss midfielder was accused by Swiss FA spokesperson, Marco von Ah, of holding two passports, one for Switzerland and one for Albania.

This is not true, however, according to his representative, Andre Gross and Xhaka’s statement above.

Gross, a Bernese lawyer, told the media, “He knows the most and also what he is allowed to pass on to the media.”

Xhaka, for his part, says his second nationality belongs to Kosovo.

Regardless, he can claim whatever nationality he wants but in the eyes of Switzerland law he only becomes a dual citizen when he holds two passports.

Which he doesn’t and never has.

What Nketiah said to Arteta after 2 goals on international duty

532 minutes combined: No rest for Tierney or Saka on international duty

Arsenal players on international duty: How did they do?