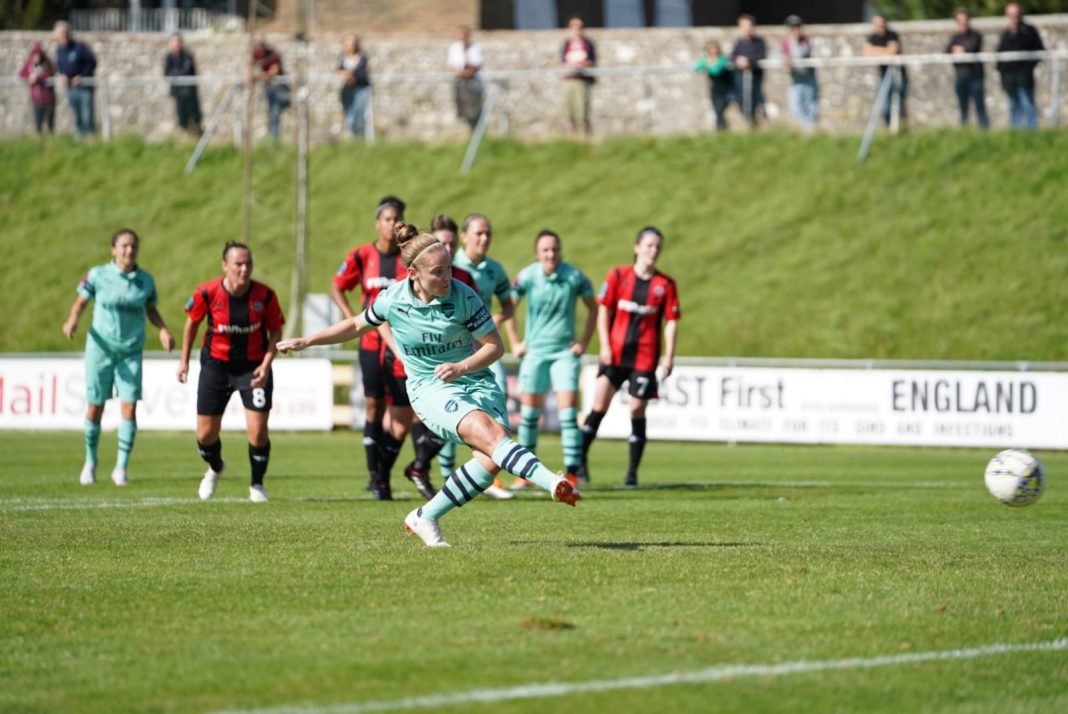 Following on from their 5-0 drubbing of Liverpool last weekend, Arsenal Women have put nine (9) past Lewes in the Conti Cup.

Another hat-trick from Vivianne Miedema, as well as one from Kim Little and goals from Danielle van de Donk, Katie McCabe and Lisa Evans, sealed the rout.

The Gunners were one up after just six minutes when Little turned on the left wing and then found van de Donk in the box.

16 minutes passed before Arsenal scored again, Miedema opening her account and picking up where she left off against Liverpool last week. Arriving last season with an injury, Miedema has needed time to settle.

She now looks ready to match her goalscoring reputation.

Goal three followed quickly after from McCabe before Miedema got her second and then Little scored from the spot. With only 37 minutes on the clock by this point, there was still time for Arsenal to win another penalty for Little to slot home.

Evans scored the seventh, set up by Miedema 12 minutes after the restart who completed her hattrick a minute later with a powerful left-footed effort that flew past the Lewes keeper.

Eight nil up, Joe Montemurro turned to his bench and brought on Beth Mead and Lousie Quinn, bringing off both Miedema, who now has six goals in two games, and Bloodworth. The ninth and final goal followed eight minutes later when Jordan Nobbs set up Little for her hattrick.

Next up for Arsenal is their Super League tie against Yeovil on Wednesday.

14 Arsenal goals in 2 wins and 1 draw this weekend

Continental Cup preview: Which teams can qualify for the knock-out stages?