Arsenal will be encouraged after it was reported that Raheem Sterling, a player they have tried to sign before, has failed to reach an agreement with Manchester City over a new deal.

The forward’s contract with the Citizens expires in 2020 as he approaches the end of the five-year deal he signed when he moved from Liverpool for £44m in 2015. With no option to extend his deal for another 12-months, City are facing the choice of giving into Sterling’s reported £220kpw wage demands, or selling him before his value drops too much. 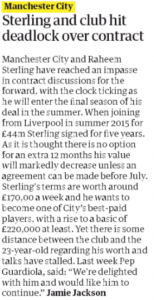 Or so the story goes…

The reality, however, is likely to be much different.

For a start, Arsene Wenger was a fan of Sterling but we have no idea if Unai Emery is even interested in him. The only other person at the club from that time is Ivan Gazidis. Given he won’t be there much longer, I doubt Arsenal will let him make any more decisions about players.

Then there are the small matters of City not actually wanting to sell Sterling, Arsenal not being able to afford him, and the player wanting to go to a club that is not still fighting to get back into the Champions League if he does actually leave.

When it all plays out, I suspect Sterling will eventually find an agreement to stay at City. Until then, however, I expect to see Arsenal linked repeatedly.