Brighton and Hove Albion will offer free sanitary products to female fans after a fan-led initiative, that began in Scotland, started to make in-roads in the Premier League.

Three women, who all support Celtic, set up the On the Ball campaign in order to increase the visibility of female fans in football and the initiative has now spread across the UK with 13 clubs already signed up.

Mikaela McKinley, one of the founders along with Orlaith Duffy and Erin Slaven, told the Guardian, “I think it takes us back to the role football clubs have a part in the community beyond football. A lot of smaller clubs were quick to come on board because they’re perhaps a bit more in tune with what their fanbase wants. But in terms of visibility, it’s great to have a Premier League club on board.”

Liverpool and Everton are believed to be considering following Brighton’s example.

McKinley added, “We don’t want to force any clubs to do anything but we want to empower supporters to encourage their clubs to provide free sanitary products either by making existing dispensing machines free of charge or by making boxes of tampons and sanitary towels available. It’s our experience that they will only be used in emergencies anyway.”

‘Period poverty’ has been shown to result in women and girls having to remain at home, missing school, work and more, because they cannot afford sanitary products which are also subject to VAT in the UK. The so-called ‘tampon tax’ which currently stands at 5% but has fluctuated, means that the average 30-year-old woman who began menstruating at 12 has spent approximately £740.65 on sanitary products, £39.66 of which is VAT.

Due to EU regulations that came into force in the 70s when the UK joined the European Economic Community, the government cannot remove this tax. Sanitary products were deemed a ‘luxury’ item. “The decisions were based on evidence available in 1972,” Rita de la Feria, professor of tax law at Durham University told the BBC. “In order to keep the zero rates, the UK basically had to stop in time.

“The rules would be as they were applied then and that would be it.

“Basically the idea was to protect lower income households.

“Anything that was a luxury was subject to VAT, anything basic was exempt.”

David Wilson, a technical director at RSM explains further. “When we joined we already had zero-rates on things like food and transport.

“We can’t turn round now and make it zero-rated because we’re only allowed to keep the zero-rates that we had in place at that time.”

The UK government previously said that they would need an agreement from all 28 member states of the EU alongside a European Commission proposal, however after March 2019 when we jump off the Brexit cliff, perhaps this is something they will address then.

Given how desperate the country will be for money at that point, I wouldn’t hold my breath. 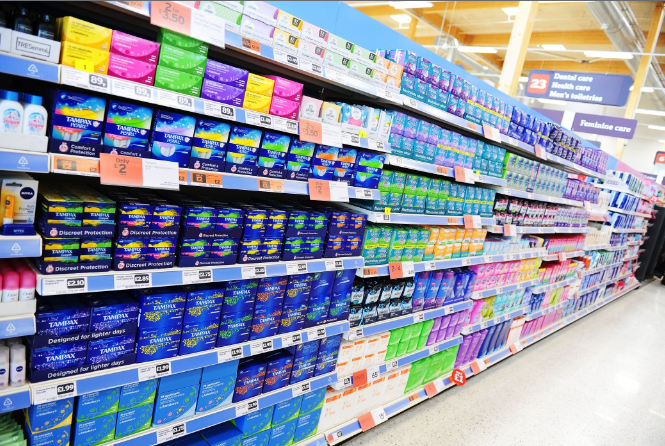 In a world-first scheme, the Scottish government recently pledged to provide free sanitary products for students.

Aileen Campbell, Scotland’s communities secretary, said: “In a country as rich as Scotland, it’s unacceptable that anyone should struggle to buy basic sanitary products.

“I am proud that Scotland is taking this world-leading action to fight period poverty and I welcome the support of local authorities, colleges, and universities in implementing this initiative.”