Steve Bould has been offered a new role in Arsenal’s post-Wenger era but the assistant manager is waiting to see who gets the job as he doesn’t really like Mikel Areta according to the Guardian.

On Tuesday it was reported (again) that Steve Bould and Jens Lehmann will be offered new jobs within the new management set-up.

The Telegraph reported, however, that Bould is delaying his decision until he knows who the new manager will be.

They claim he will leave if it is Arteta or Nagelsmann as he has ‘reservations about working for a younger manager’. As we now know, it certainly won’t be Nagelsmann.

The Telegraph also linked Bould with the managerial job at Stoke, where he was previously on a shortlist to replace Tony Pulis, even though Paul Lambert is still in the position.

On Wednesday, David Hynter writing in the Guardian, says, “It is unclear whether Steve Bould would stay, with Wenger’s assistant not always seeing eye to eye with Arteta when they were together at Arsenal.”

Arteta, it seems, would be more than happy to return to the club he says he supports.

“It has been a dream and a real pleasure to be part of this club,” Arteta said in 2015. “I was always an Arsenal supporter when I was in England because I loved the club’s philosophy and I wanted to enjoy this club.

“I think I have been developing every year to be more and more important to the point where I’m the Arsenal captain, which is something I’m really privileged and honoured to do. 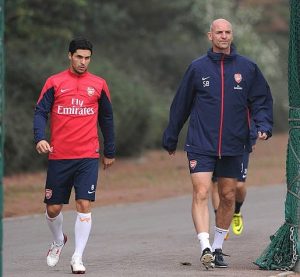 Ivan Gazidis wants a head coach, not a manager.

That was one of the problems, apparently, with Max Allegri, who would want control of the transfer budget whereas an appointment like Arteta allows Gazidis to retain far more control behind the scenes.

Arsenal’s chief exec has moved to a new office at London Colney as he reportedly positions himself as ‘Kingmaker’ at the club in the wake of Wenger’s departure, according to the Telegraph.

It’s worth noting that the Mail and Telegraph also report that Freddie Ljungberg is to return to Arsenal as part of the u23 set-up. This was first reported by the BBC’s David Ornstein but Freddie spoke to the Swedish media to say it is not true.