Phase 2 of the licensing process for FA WSL teams has now been completed and we now wait until June to know who which teams will be selected for Tier 1 and Tier 2.

In the first phase, 10 teams were selected for the FA WSL and seven for the Championship.

All the current FA WSL 1&2 teams that applied for a license were granted one, albeit a conditional licence for certain teams.

The BBC say that 15 teams have applied for the new League, but, as usual, the FA has refused to name those teams and we are left to guess which clubs are involved in the process.

So, this a bit of guesswork as not all the bids have been publicly disclosed. Here is what I have gathered from the data collected on the web: 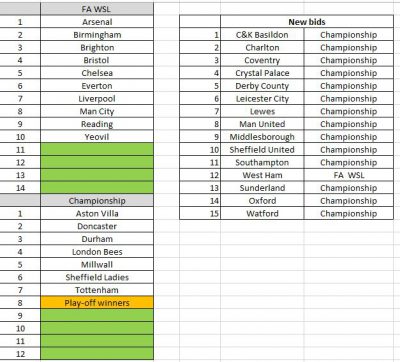 As we can see, there are four spots available in the FA WSL and five in the Championship for 2018/19, including one spot that is reserved for the FA WPL play-off winner between the Northern and Southern Division champions.

We can also see there is, allegedly, only one bid for the FA WSL and 14 for the Championship.

Clearly the Championship is oversubscribed.

There is no doubt that West Ham will get the 11th FA WSL spot, as long as they bring enough cash. They were talking about a six figure budget. They would probably end up with a top 5 budget at that kind of level.

It is quite obvious that the FA WSL cannot be played with an odd number of teams. It should be either 10 or 12 teams or even 14 if the FA can find another three professional teams out of the 14 other bids in addition to West Ham.

Manchester United, who have announced they will have a full professional team next season if selected, are an obvious suggestion.

Rumour has it that they would pay all their players £20k +. Some current FA WSL1 teams don’t pay their players that much. At least three teams definitely don’t.

There is no doubt that there are some very strong bids for the Championship from teams that have been playing in the women’s football pyramid for years.

It would be a hard pill to swallow to see a newly created senior team like United or Southampton bypass all those who have been working hard for years, something that the FA seem keen to see apparently.

Let’s be honest, this would never happen in men’s football.

If I bought a team with a junior structure and tried to buy my seat in the Premier League or the Championship, the answer would be ‘no’, whereas I could do that this year in the FA WSL.

With one place reserved for the FA WPL play-off winners and eight teams still in the running, with at least five who have bid to go straight through, the FA’s decision date comes after the final, allowing themselves some leeway on the winning bids.

My predictions on the winning bids is as follows:

FA WSL: West Ham and Manchester United (who have not applied for a licence, but rules can be changed, as usual), plus any team that comes up with a budget over £400,000.

Championship: Absolutely no idea as there are potentially many great bids.

What is guaranteed is that there will be many disappointed teams when the winners are revealed and the Summer transfer window will be extremely busy for the successful teams involved.