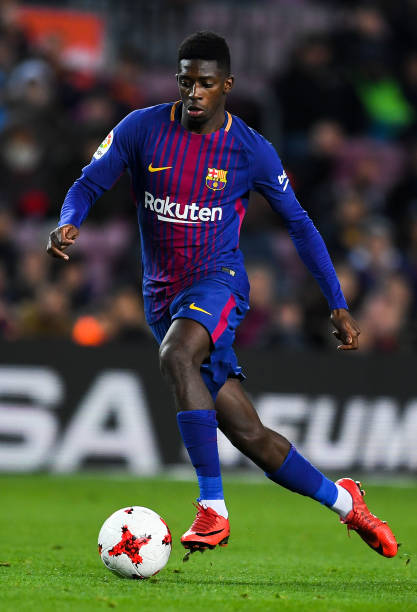 Ousame Dembele has reportedly asked to be allowed to leave Barcelona to team up with Pierre-Emerick Aubameyang according to the outlet in Spain that is obsessed with Karim Benzema joining Arsenal.

At least that’s what the Daily Star are claiming.

They said that Don Balon reported on Tuesday that the former Borussia Dortmund youngster wants to play for Arsenal in order to link up with Auba again.

Except that’s not what the Benzema-obsessed publication wrote.

Don Balon reported that it was Pierre-Emerick Aubameyang who asked Arsenal to sign Dembele.

Lost, it seems, in translation.

The 20-year-old only joined the Catalans last summer but has seen his opportunities in La Liga restricted to just nine appearances totalling 424 minutes.

Even if he has asked to leave – and he doesn’t appear to have – Barcleona are hardly going to part with the player just 12 months after shelling out £99m for him.

If they did decide to sell him, they are not going to do so at a price Arsenal would be willing to pay.

Almost exactly one month ago it was reported that Dembele would snub a move to Arsenal in favour of joining Chelsea on loan.

Now we are to believe he has asked to be allowed to join Arsenal or could even be considering a move to the Gunners.

It is also claimed he could move to Liverpool should Liverpool sell Mo Salah, a player they have stated categorically stated they won’t sell.

…that’s exactly what Arsene Wenger has been doing while in France.

In an interview with beIN Sports, Wenger said, “For me, he’s one of the best players in Europe at the moment.

“He can score goals against anybody because in England you have many good defenders and he’s top scorer in the Premier League.

“He’s scored in Italy and in England.

“So overall, I think to keep him quiet will be very difficult at the World Cup.”