Arsene Wenger has provided a positive injury update on Alexandre Lacazette ahead of the Watford match, as has the player himself.

Speaking ahead of the Premier League clash against Watford on Sunday, Wenger explained that while the 26-year-old is on the mend, he won’t be back in action for the team until after the international break.

“Alexandre Lacazette has his first run today, but won’t be back until after the international break,” he told Arsenal.com.

The international break is two weeks away (23-27 March), which means Arsenal’s first confirmed fixture afterwards is against Stoke at Ashburton Grove.

Although there is a trip to Leicester pencilled in for before that, the date is yet to be confirmed.

When Wenger first revealed that Laca had undergone surgery on his knee, he said the striker could be out for ‘four or five’ weeks.

“He got a surprising swell of the knee after the game against Tottenham and needed surgery, very quick surgery, and he will be out for the next four or five weeks,” Wenger told beIN SPORTS . “It’s a massive blow for us, but we have to find a solution.”

Therefore, while it’s great to get a positive update from the manager, Laca’s pretty much just running on schedule.

The player has been giving regular updates on the progress of his recovery via his Instagram and, on Friday, he shared an image of a similar treadmill to the one we saw Jack Wilshere walking on back in May 2017. 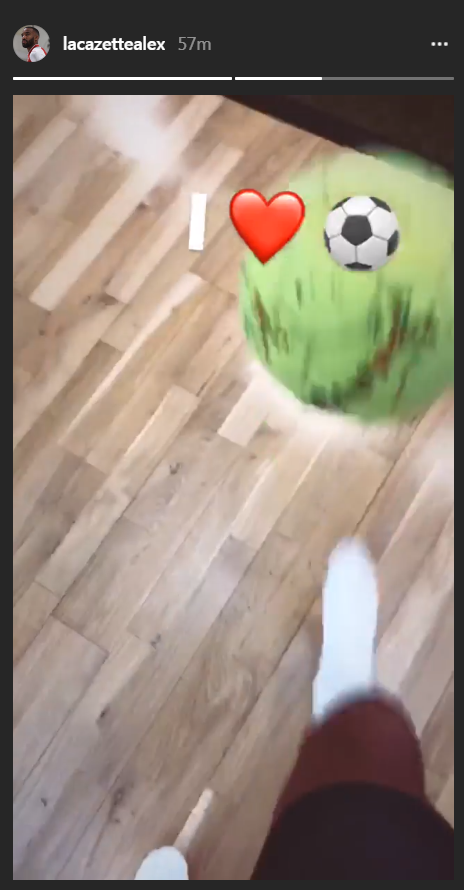 It looks like an anti-gravity treadmill, which is designed to help rehabilitate leg or knee injuries.

As the Telegraph explained last year:

The space around your legs fills with air, lifting you up, allowing you to exercise at a fraction of your body weight and reducing impact and pressure on your joints as your run.

The France international then shared a short video of himself doing keepie uppies.

It seems like Laca still has a way to go in his recovery but everything appears to be running smoothly, which is good to see.