It’s far too soon to write off Alexandre Lacazette.

Arsenal fans dared to dream when £52m signing Alexandre Lacazette burst through on goal in the dying moments of Saturday’s North London derby. But Lacazette dragged his shot wide, squandering his second excellent chance after coming off the bench, and Arsenal lost 1-0.

The papers dubbed it a 1-0 rout and a 1-0 thrashing and they were justified as the scoreline flattered the Gunners. Lacazette bore the brunt of fans’ frustration after the game, with some suggesting he should be shipped out of the club. But is it too early to write Lacazette off as a failure?

The Frenchman arrived at the Emirates with a formidable reputation as one of Europe’s deadliest strikers, having banged in 100 goals in 171 starts for Lyon.

Naysayers decrying the quality of Ligue 1 were reminded of his supreme goal scoring exploits against strong opposition in Europe, and it seemed like Arsenal finally had the lethal marksman the fans had long been craving.

It was a bit bizarre that Olivier Giroud kept him out of the France team, but that was accredited to the quirks of Didier Deschamps rather than any deficiency in Lacazette. 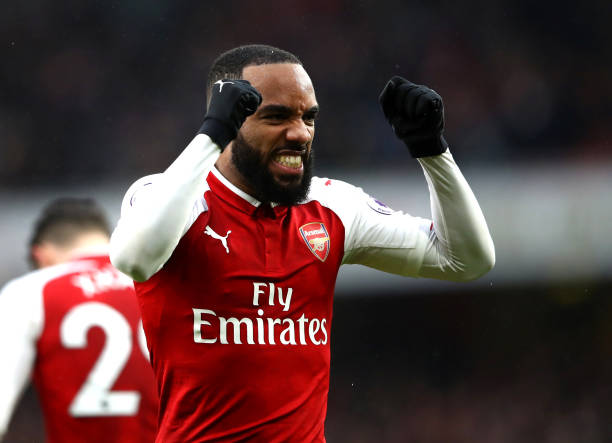 He made a glorious start to his career, nutting in the opener in a madcap 4-3 victory over Leicester on the first day of the new season. He showed he was not quite as quick as some fans hoped, but the general consensus was that Arsenal had a Jermain Defoe or, better yet, an Ian Wright on their hands, a lively, dynamic goal scorer with a low centre of gravity, expert movement, a powerful shot and a great eye for goal. But Lacazette has not exactly delivered on his promise.

A return of nine goals in 25 starts and four substitute appearances is not exactly eye-catching, and he has looked bereft of confidence for weeks now. He has only scored once in his last 13 games, and his goals per minutes ratio has plummeted to 202 minutes. Contrast that with Kane, the goal scorer on Saturday, who has a goal every 97 minutes, or Mohamed Salah, who has managed one every 93 minutes despite playing out wide. Sergio Aguero has a goal every 85 minutes, and Lacazette’s record is inferior to Alvaro Morata, Roberto Firmino, Romelu Lukaku, Jamie Vardy, Wayne Rooney, Anthony Martial and Eden Hazard.

It is far worse than Giroud’s ratio and not what you expect of an elite striker signed for north of £50m.

But there are mitigating circumstances. It has been a strange old season at Arsenal and he would have expected far better service. Lacazette has frequently been isolated up front, particularly away from home, where Arsenal have flopped badly. The Alexis Sanchez saga cast a grim shadow on the club and the attacking football was by no means as fluent as you would expect under Arsene Wenger. Mesut Ozil has frequently been out injured and Lacazette struggled for chances alongside Alex Iwobi and Danny Welbeck. He has produced some smart finishes, and has also linked play well.

But his already fragile confidence will have suffered a hammer blow when Arsenal broke their record again to sign Pierre-Emerick Aubameyang, put the new boy up front against Everton and benched him. The Gabonese is quicker and offers another dimension going forwards, and Lacazette is at risk of becoming the Wiltord to Aubameyang’s Henry. However, to avoid that he has to take his chances when given them, and he spurned two glorious opportunities to win the fans over on Saturday.

Betting sites will have the latest odds, check them out and you will see that Arsenal are now enormous outsiders to finish in the top four. If they do not qualify for next season’s Champions League, their financial muscle will dwindle, and they may have to sell players in order to plug holes in the squad – Petr Cech looks past it, defensive reinforcements are needed, and we can keep praying Wenger will buy a defensive midfielder. That could spell the end of the road for Lacazette, which would be a crying shame given the optimism that surrounded his signature.

But there is a chance of redemption. Arsenal are in the last 32 of the Europa League and the winner earns a Champions League spot, as Man Utd did last season. Aubameyang is ineligible for the tournament, and Giroud and Theo Walcott have left the club, so it will be up to Lacazette to lead the line in the competition. Get past Swedish minnows Osterund and Arsenal are in the last 16. The only top teams left in the Europa League are Atletico Madrid and Napoli, and if Lacazette can fire the Gunners past the likes of them he could turn his time at Arsenal around in style.

Following Euro 2020, How Could Arsenal Line Up to Get the Best from Bukayo Saka?