Hector Bellerin has covered the third-most ground in the Premier League so far this season, but is this necessarily a good thing?

The Daily Mail claimed ahead of the North London Derby that Bellerin had run 186.9 miles this season. Only Burnley’s Jack Cork (197.7 miles) and Brighton’s Dale Stephens (189 miles) had covered more. 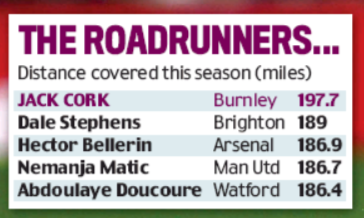 If you take Bellerin’s position into account, the fact he runs quite a bit isn’t really that surprising.

The 22-year-old has to routinely dash up and down the flanks. But in past seasons, the distance covered by the young Spaniard hasn’t matched up to the likes of Mesut ‘Lazy’ Ozil and Aaron Ramsey.

And that’s the way it’s supposed to be.

A team’s central midfielders are supposed to be at the heart of everything. One minute they can be defending, the next threading balls through to the forwards and then making marauding runs into the area themselves.

They need to be moving all the time.

This season, both Ozil and Ramsey have been out injured more than once whereas Bellerin has managed to stay fit, so it stands to season that the right-back has run the most overall. However, it also hints at Arsenal’s lack of authority in midfield.

Arsene Wenger’s men are no longer trying to thread the ball through midfield, which means the midfielders are working less. Oftentimes this season, Arsenal have looked as if they’re not even playing with anyone in the centre of the park.

If you look at the other names on the list of players who have run the most – Cork, Stephens, Nemanja Matić and Abdoulaye Doucouré – they’re all midfielders. They’re the men you want running from box-to-box, dictating play.

Bellerin is the only wing-back on there, suggesting Arsenal are trying to force play from the flanks. And it’s obviously, for the most part, not been working.

Where Arteta’s tactics went wrong for Arsenal vs Crystal Palace