There is no way for Wenger to redeem himself to enable a long-term stay at the club beyond 2019 when his current contract expires.

Even a league and Champions League double in his final season would simply have fans asking for him to leave on a high.

I get why fans of clubs below the top six think Arsenal fans are ungrateful spoilt brats.

After years of crying for a trophy, any trophy, we’ve won three FA Cups – the largest domestic trophy available after the league – in four years, yet here we are demanding the head of our manager.

It’s also easy for me to make that comment about winning the league and Champions League double because it simply won’t happen. Like offering £1m on Twitter to the person who could name the last match David Ospina played in that he didn’t injure himself doing ordinary goalkeeper things, I knew there was no way anyone could remember, so my offer was safe.

It’s the same with Wenger.

You can lay out all the hypotheticals you want, but the only thing that matters are cold, hard facts.

17/18 was supposed to be a season when Arsenal showed Alexis and Mesut Ozil they were a team worth playing for.

It was supposed to be the year, freed from the demands of Champions League football, we stormed up the league while the kiddies took care of Europe.

As it stands at the time of writing, we are eight points worse off in the league after 22 games than we were last season.

Dumped out of the FA Cup, we now have to take the League Cup more seriously, and assuming we don’t Forest-up our tie against Ostersund, we will no longer have the luxury of resting our first team for European games so they can concentrate on the league.

In short, this season is gearing up to be considerably worse than last season and it has all been so predictable.

Last season Alexis Sanchez was in the form of his career, scoring 24 league goals and creating 11 in 38 games. Overall, he scored 30 and created 19.  It is no exaggeration to say that he was a large reason why Arsenal were able to finish as high as fifth.

He also scored the winner against City in the FA Cup semi-final and the opener against Chelsea in the final. In short, without him, there’s every chance Arsenal would have finished further down the table and won nothing.

This season Arsenal have been playing without him, his head, if not his body, in Manchester from the 1st September until the 31st December.

He was never going to replicate last season’s form anyway, forwards rarely do and the ones that manage year after year it are at clubs like Real Madrid, Barcelona, PSG and Manchester City when they are in their peak years. Alexis is 29 now and Barca shipped him out as his peak approached.

Arsenal splashed big on Lacazette, but after an initially impressive start, he has looked like a player who needs time to settle. Or a team that plays to his strengths at the very least. It’s worth noting that Lacazette’s last three goals in the league have been set up by Ramsey and he hasn’t scored since the Welshman got injured.

But he was never going to deliver a 20+ Premier League goal campaign in his maiden season. 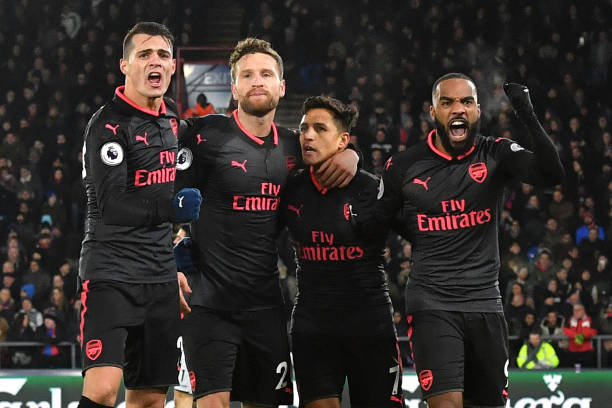 Similarly, Theo Walcott scored 10 league goals last season but has played just 49 minutes, with nothing to show for it, this.

Last season Arsenal hardly struck anyone as a side that could afford to lose 34 goals from its players and do better. Somehow, we’re only on track to score eight goals fewer over the course of 38 games than last season, but we haven’t sold Alexis yet.

As if the problem of scoring goals wasn’t bad enough, keeping them out at the other end has been even worse.

We’ve shipped 44 goals this season in all competitions, 28 of those in the league. We let a struggling, managerless Nottingham Forest score four against us for crying out loud. Not only are we on track to score fewer, we are on the right path to concede more. We also sold a centreback and a fullback and only replaced one of them.

Meanwhile, Wojciech Szczesny is ripping up Serie A with more cleansheets than goals conceded. Yes, he has the Juventus defence in front of him, but do we really think we’d have conceded 28 in the league with Woj between the sticks? If you do, then you haven’t been watching his development over the past three years closely enough.

That, of course, raises the argument of whether he would have developed as well under Gerry Peyton at Arsenal and I think we all know the answer to that.

Then there is the matter of Santi Cazorla.

I’m no expert but even I knew the minute I heard about the severity of his post-surgery complications that he would never play again. I’ve had major surgery, including grafts. I know how the body reacts afterwards and how long it takes to get that body part feeling normal again. They almost had to amputate his leg to save his life, such was the severity of his infection. All the positivity in the world will not make Santi’s ankle work properly again.

One of two things happened here. Either the club did not know the severity of the problems Santi was facing or they did and chose not to compensate for losing the heart of this team.

Don’t throw Jack Wilshere at me when the club have been so uncertain about his future they waited until the last six months of his contract before they started taking his renewal seriously. Jack being fit and available this season has been a lucky break, not a well-thought out strategy.

I don’t know about you, but scoring less, conceding more while not replacing key players is a really awful way of showing you know how to get the best out of this team.

I have neither the time nor inclination to look at the seasons before last and see if this is a pattern that is slowly unfolding year-on-year. The fact is it feels like it is and perception can be king in these things.

For so long we heard how fans only want trophies, they don’t want fourth place. Then we got exactly that only to realise that the true measure of a team is not in the cups it wins but in its ability to compete toe-to-toe with their rivals over the course of a sustained campaign.

Any bunch of morons can win a shiny tin pot. They are the sprinkles on your ice cream, but without the Ben & Jerry’s what are sprinkles?

Wenger has always maintained that point, especially during the trophy drought and was mocked for it. But he’s right. In this era of football, Champions League matters in terms of money it affords the clubs and prestige in attracting players.

By virtue of Pep Guardiola turning the Premier League into the Bundesliga and other teams around us being a little bit crap too, Arsenal go into this weekend’s game just five points from fourth place and eight points from second. They can consider themselves fortunate.

Arsenal can still save this season and get themselves back into the Champions League, but to do that they are going to have to arrest a slide that has been almost five years in the making. History tells us we can put together a run towards the end when it matters, usually because we’ve been dumped out of the Champions League and are free to focus on the league.

It’s not about whether it will be too late by then, but if this team is even capable of putting together the run needed while also distracted by the Europa League and off-field circus.

They couldn’t last season and results this season would seem to offer a definitive answer to that question – a resounding ‘no’.