Malcom is with his agent to ‘finalise a transfer to Arsenal’ on Monday, according to reports, as his representatives hint at a move on social media.

French journalist, Romain Collet-Gaudin, tweeted out a picture of the Brazilian with his representatives this morning (Sunday).

He captioned it “Malcom is with his agent Conarcini to finalise his transfer to Arsenal”.

Over the weekend, one of his agents suggested a move is close on Instagram.

Fernando Garcia liked a comment posted by an Arsenal fan, saying “like this if malcoms [sic] a gunner?” 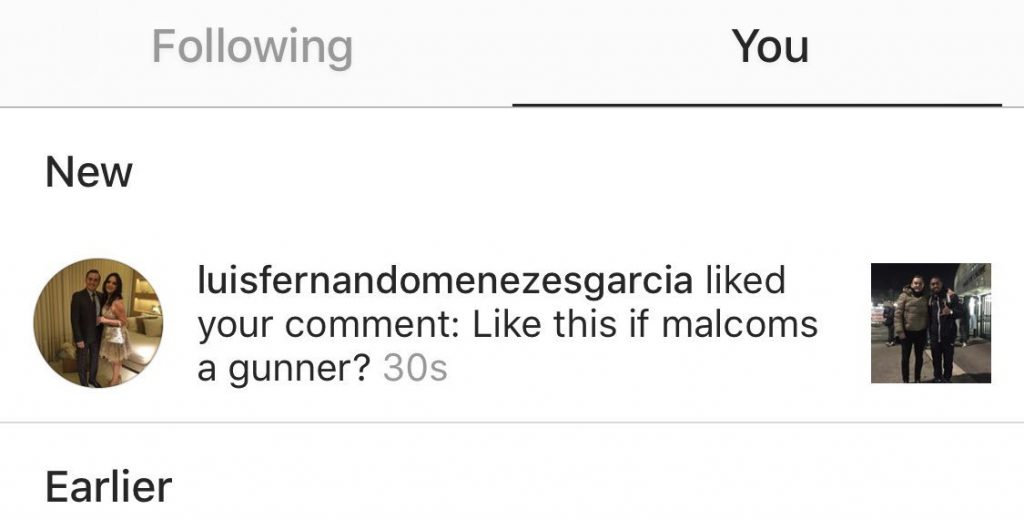 Wenger didn’t give much away about the potential transfer in his Bournemouth post-match press conference.

When asked whether Sanchez would be replaced, he responded “yes, of course”. When the reporters pressed him on Malcom specifically, the Frenchman was much less assured. He said: “No. Nothing is concrete there.”

When asked if Arsenal were after him, he said, “It’s better I don’t come out on any specific names.”

According to Goal‘s (apparently reliable) Bruno Andrade, Arsenal have a meeting on Monday to finalise the details of a transfer. Reports from a reliable publication in Brazil on Friday, Arsenal wanted the deal sorted this weekend.

The journalist claims the two sides have agreed on a fee of around €50m.

Wenger says Arsenal will decide Alexis Sanchez’s future in the next 48 hours. Perhaps the two time-frames are linked, and Sanchez’s move depends on whether the Gunners sign Malcom on Monday.

Either way, I’d expect things to move pretty quickly over the next few days.

French outlet Sud Ouest (via Bein Sports) claim the Ligue 1 club’s preference is a summer transfer, or a January deal with a loan back to Bordeaux until the end of the season.

That’s unlikely to suit Arsenal, if the Gunners are losing Sanchez now.

Malcom is still very young, at only 20 years old.

Under normal circumstances, a loan back for the rest of the season would probably work pretty well.

In this case, the Brazilian is showing the kind of form to suggest he’s ready for the step up now. He has seven goals and six assists in 21 games this campaign.

Plus, Arsenal don’t have too many alternatives, especially with a lot of goals and assists in the league.

Alex Iwobi only has one goal and one assist this season.

Danny Welbeck has three goals and one assist and the last one came in early September.

Theo Walcott is yet to get off the mark in either category.