Arsenal are closing in on a £53m move for Pierre-Emerick Aubameyang, so why are the Gunners pushing to sign the 28-year-old?

The obvious reason is that Aubameyang is a top class striker.

This season, despite three suspensions, the Gabon international has 21 goals and three assists in 23 appearances. Don’t even bother trying to find an Arsenal player who is contributing to more than one goal-per-game right now.

This campaign isn’t a one-off either. 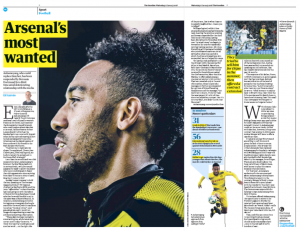 Wednesday’s issue of The Guardian reports that the centre-forward also has strong links to Sven Mislintat. The Gunners’ new head of recruitment helped sign Aubameyang for Borussia Dortmund in the first place. The paper speculates that the German could have influenced Arsene Wenger to make a move.

It helps that the former Saint-Etienne man also seems to hate Tottenham. The club tried to sign Aubameyang in 2012, but he rejected their approach. He later said (via The Guardian) that their offer was “weird. I didn’t really like the way things were done. If Spurs ever came back in for me, I’d say no.”

The Dortmund man has done pretty well against Arsenal’s North London rivals on the pitch as well. He has four goals in four matches against them.

Combined with Lacazette, who provided an assist in the derby this season, they could form a dangerous duo.

If the Gunners can pull this deal off, it’ll be a massive step in the right direction. The club are already losing Alexis Sanchez, and Mesut Özil’s contract is expiring.

Hopefully the signing will, as is being reported, convince the German to stick around.