Eddie Nketiah believes pre-season training with the first-team helped him improve, and he says he aspires to play against the best players in the world on a regular basis.

Nketiah was a part of Arsenal’s squad that toured Australia and China in pre-season, and was where he had his first taste of first-team action.

He appeared in all of Arsenal’s tour games, including the penalty shoot-out win over Bayern Munich in the International Challenge Cup. 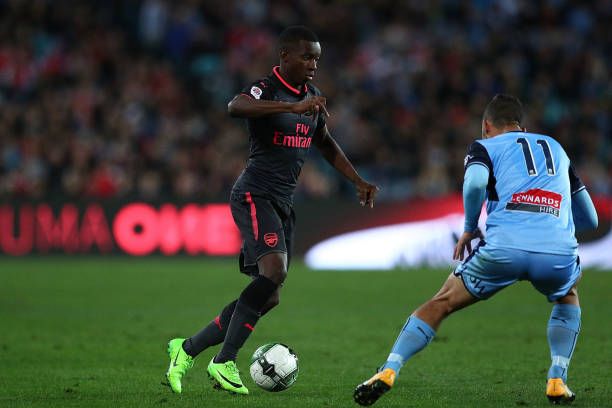 The 18-year-old, who recently signed a new contract with the club, believes that experience set him up to make his big breakthrough this season.

“It was huge and allowed me to improve my game as I was training with the first team day-in, day-out in China,” he told the Evening Standard.

“I think it evolved my game and it was just a great experience in general. Fingers crossed I just get more and more experiences like that.

“I managed to get some minutes against Bayern and went up against some of the best defenders in the world in [Mats] Hummels and [David] Alaba, so it was a really good test, which improved me.

“It made me even more hungry for this season and gave me the right mentality to push on and work hard to really get more opportunities, because ultimately that’s my end goal, to play against the best players in the world more often.”

That breakthrough came against Norwich in the fourth round of the Carabao Cup. With the team trailing 1-0 to the Championship side, Nketiah came on with six minutes remaining and scored the equaliser with his first touch.

He went on to head in the winning goal in extra-time, a moment that made him a firm cult hero with the Emirates crowd. Nketiah’s name is now frequently chanted by the Arsenal supporters whenever he’s in the squad.

“That night will stay with me for ever,” he recalled. “I’m just so grateful to the boss for giving me the chance and to the fans for welcoming me by singing my name like that. I’m just happy to have been able to help the team with a couple of goals.

“It was another great moment and was nice to be able to give back to the boss for believing in me. I wasn’t really nervous, I’ve been scoring goals all my life, so I’ve always believed I could go out there and do it.

“To bring it into reality was incredible and I wouldn’t say I feel any pressure now. I’m just trying to stick to my normal game and play and train hard, so that when the next opportunity arises I’m ready to make the impact again.”

Nketiah will be hoping for further opportunities when Arsenal take on West Ham in the Carabao Cup and Nottingham Forest in the FA Cup.

“I will smash you”: Granit Xhaka tells Martinelli and Jesus