Mathieu Debuchy says he wants to leave Arsenal in January, despite making a return to first-team football with the Gunners.

Debuchy started on Tuesday, as Arsenal beat West Ham United 1-0 in the Carabao Cup quarter-final, and things seemed to be improving for the defender.

However, his latest comments suggest the opposite, with the 32-year-old reportedly telling RMC Sport: “I want to leave in January. I want to find another challenge.”

Despite the French international finding a regular starting spot in the Europa League and League Cup, he’s played almost no part whatsoever in the Premier League.

In November, the former Newcastle United man appeared on the bench once, against Manchester City. Other than that, Arsene Wenger hasn’t even selected him for the squad. 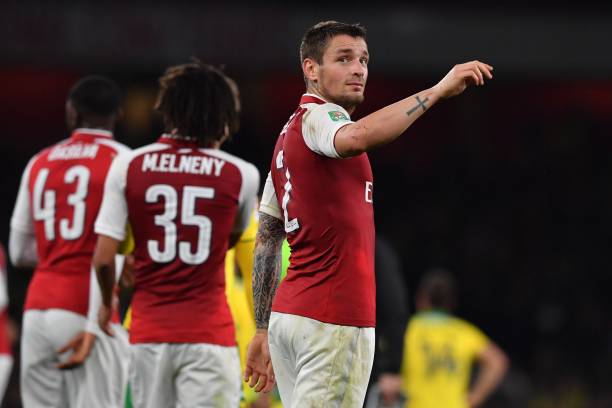 Still, this is an improvement on last season. Debuchy played 16 minutes for the Arsenal first-team in 2016/17, and that was it. As a result, the media linked him to a number of clubs over the summer, but nothing came of it.

Arsenal’s number two looked set to join Nice, before the Ligue 1 club signed Christophe Jallet instead. Then Wenger reportedly gave in, and told Debuchy he could leave for free if they could find a buyer. Brighton made an enquiry, but the defender’s salary and lack of game time seemingly put them off.

In my opinion, it’s fair enough if the Frenchman wants to leave the club at this point. He only has a contract until 2019, so he’ll be off in the next few windows either way.

Debuchy’s performed well for the team recently, for me, and doesn’t seem to have any chance to become first choice. Also, the World Cup is coming up in the summer. Keeping his slim hopes of a call-up alive is also probably a factor.

All you can really ask of a player who is clearly out of favour, is that they continue to give their all when called upon. That’s what Debuchy has done. So if a club makes an offer in January, I think it’s only fair to consider it.

2 German clubs join race to sign Arsenal 29yo in January