Arsenal are still third in the Injury League this week with six players sidelined.

While David Ospina was predicted to have fully recovered from his groin injury in time for Arsenal’s Europa League clash against Red Star Belgrade on Thursday evening, he’s now been ruled out but should be back for City.  Sead Kolasinac (hip) is also expected to return against at the weekend. Calum Chambers (hip) will not.

Meanwhile, Shkodran Mustafi (hamstring) and Danny Welbeck (groin) should be back in action after the international break, which takes place after Arsenal’s trip to the Etihad.

Santi Cazorla (ankle) is out until goodness knows when.

Everton still top the Injury league table with Watford hot on their heals.

Southampton are still bottom while Chelsea and City continue to be blessed in the injury department. 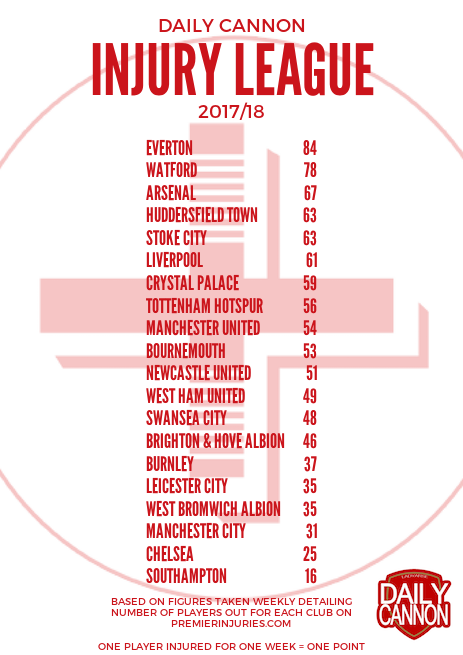 Here are the current injuries reported for the top five in the table:

Keep up-to-date on all of Arsenal’s current injuries, as well as our next four opponents’, here.