Zinedine Zidane reportedly asked for Real Madrid to sign Alexis Sanchez but then allegedly rejected the chance to sign the Chilean when offered.

On Friday, the Express, who credit Spanish outlet Don Balon as their source, claimed that Zidane asked Real Madrid president Florentino Perez about bringing Alexis on board.

Karim Benzema currently has a hamstring injury and Alvaro Morata signed for Chelsea in the summer, so they appear to be struggling for goals this term. In fact, Los Blancos are currently down in fourth place in La Liga and have scored just 11 goals in six games. Barcelona, who top the table, have scored 20.

“It’s true, when you look at the players we had like Morata,” Zidane said.

“And when you see that now we only have [Borja] Mayoral that you might think we lack a No 9.

“I would have liked Morata to stay, but he wanted to play more and to leave.

Alexis would most likely help with this issue, if he could actually get game time at Real, and Zidane reportedly wants to sign him in January.

However, the latest report from the Daily Star, who also cite Don Balon, is that Zidane has been offered Alexis by Arsenal… and he rejected the offer… 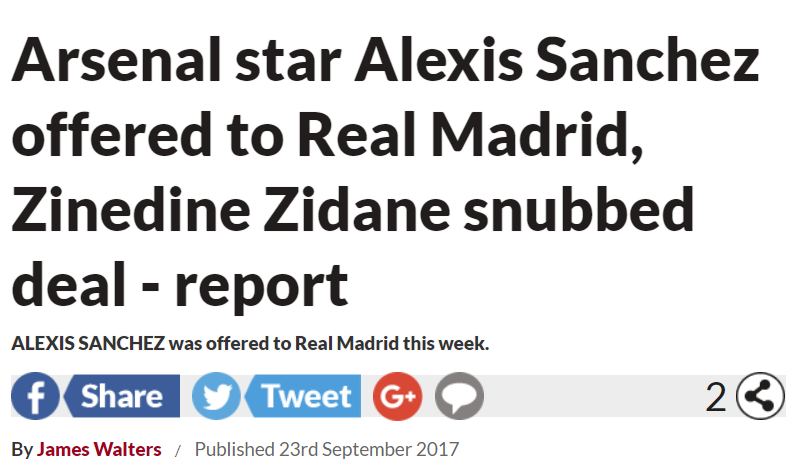 So, the same outlet, Don Balon, first of all claims that the Real Madrid manager is desperate to get Alexis and has asked the club president to sign him but when he’s offered the 28-year-old he says no…? Is he okay?

I have no words.

A prime example of why you shouldn’t believe everything you read.