After losing 4-0 to Jurgen Klopp’s team before the international break, Arsenal have a massive point to prove and nothing but an emphatic victory will do.

Arsene Wenger insists that the Gunners aren’t in crisis but the nature of the loss at Anfield combined with lack of activity in the transfer window means that fans don’t have a great deal of faith in their team or manager right now.

While any win would be more than welcome right now, I can’t help but feel that Wenger really needs to inspire the lads and push for a massive win on Saturday afternoon.

Otherwise, we’ve got serious problems that I don’t know we can recover.

Alexis Sanchez isn’t going anywhere until at least January so hopefully he can finally pull on his big boy pants and produce a performance for his current club.

Saying that, the 28-year-old wasn’t great for Chile during the international break so perhaps he’s just not fit yet.

While there are no further injuries to the Gunners’ first team, Wenger’s not sure if Jack Wilshere is fit enough to appear against his former loan club, and Santi Cazorla isn’t going to be back in action until after Christmas.

Since Alex Oxlade-Chamberlain has signed for the very same side that thumped us 4-0 and Alex Iwobi is current out injured, Reiss Nelson could come in, which the boss may have hinted at during his pre-Bournemouth presser.

Wenger on Ox leaving: "I think he's a great player, but sometimes it opens the door for a younger player like Nelson."

Considering the manager’s starting XI against Liverpool, who he’ll actually pick on Saturday is anyone’s guess. Petr Cech up front anyone?

Last time Arsenal met Bournemouth, they drew 3-3 after going 3-0 down before the 60th minute.

The Cherries aren’t faring too well this season and have lost three out of three Premier League matches against West Brom, Watford and Manchester City.

They have Callum Wilson ruled out with an ACL injury.

Benik Afobe and Nathan Ake should return from slight knocks but Simon Francis is a doubt with a hamstring injury.

The match kicks off at 3pm UK time on Saturday 9 September.

If you live in the UK, the match won’t be shown. However, audio will be available on Arsenal Player.

For all other countries, see the list below from LiveOnSat.com: 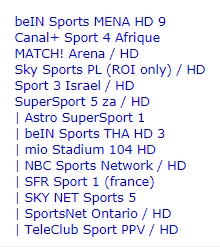