Carrasso’s contract with Bordeaux expired on the 8th September, and therefore over the summer the French ‘keeper was searching for a new club. According to quotes from the player in L’Equipe, he accepted an offer from Arsenal, but some problem with agents ended up preventing the move. 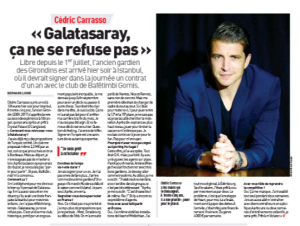 He said in L’Equipe: “Arsène wanted to operate with 3 good goalkeepers. I was supposed to go there as 3rd choice. At the beginning, I said to myself: “3rd choice to do nothing, that is not being part of a squad, that is not interesting.” But then I told myself: “It is still Arsenal!” And then again there was a problem with agents.”

Now Carrasso is signing for Galatasary, so Arsenal are left looking to youth for a third choice goalkeeper. Matt Macey is the most likely next in line, but Arsène clearly considered a more experienced option in Carrasso.

It’s interesting that Arsenal considered bringing in a goalkeeper, but didn’t try again when the move fell through. There surely must be other keepers out there in the same bracket, but Arsenal didn’t end up signing anyone.

We’re still not past the generation of footballers who spent most of their lives watching the likes of Patrick Vieira, Robert Pires and Thierry Henry play for the Gunners. The fact that Carrasso considered joining despite knowing he would “do nothing” shows that still counts for something.