Former referee, Keith Hackett, believes that Leicester have the right to feel ‘aggrieved’ after Mesut Ozil got away with illegally handling the ball on Friday night.

Hackett believes he saw Ozil control the ball with his arm before Aaron Ramsey’s goal. Referee on the night, Mike Dean, wasn’t able to see said handball because the German’s body was apparently in the way ‘screening’ the illegal offense.

The ‘handball’ has been analysed to death, with the Metro even including a handy (no pun intended) screen shot of the moment Ozil committed the heinous crime. 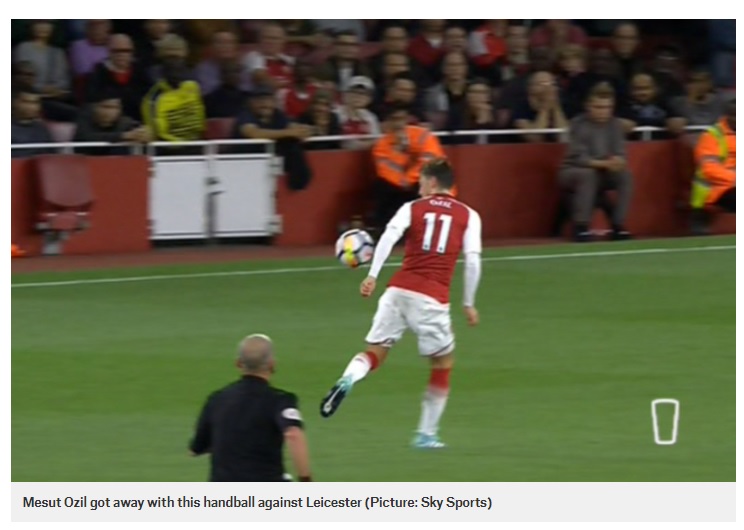 However, when you actually watch the ‘handball’ in real time, you realise that the ball was passed up the pitch to the German, who had his arm by his side. Sure, by the letter of the law, it was probably a handball but no more so than Wilfred Ndidi’s in Arsenal’s box at the other end.

Both would have been harsh. Ozil’s wasn’t in Leicester area and Ndidi’s was from close range.

For those talking about Ozil's potential handball – something far more pivotal earlier in the game. This is a penalty every day of the week. pic.twitter.com/uPVKp7pycr

What’s more, if you listen to how people are talking about Ozil’s handball, you’d think that Rambo’s goal happened as a result.

Not at all. The incident actually occurred around 90 seconds before the equaliser.

But hey, it’s Mesut Ozil, public enemy number one. We can’t allow that maniac to get away with anything! Oh, and by the way, he’s LAZY.