The S*n are today running full tilt with some claims from Italy that Shkodran Mustafi is eyeing the Arsenal exit door just 12 months after arriving at the cub.

Citing ‘reports from Italy’ that they neither name nor link to, the S*n’s story is no surprise given that it comes shortly after it was claimed that Inter Milan were interested in the player. In fact, reports have already claimed that Inter have contacted Arsenal to arrange a loan deal for the German, but that the club, unsurprisingly, have told them where to go.

Even in the reports that claim Arsenal have rebuffed the Italians, it is claimed that ‘Arsenal want to get back most of the money they paid for him last year’ – comments that make absolutely zero sense to anyone who knows the first thing about Arsenal (no surprise that Sky Sports don’t attribute their report to an actual journalist).

Mustafi has given no indication that he is unhappy at Arsenal or looking for a move away. He is first choice at the club and stated that he would only leave Valencia if he had the chance to go England – not Italy, England 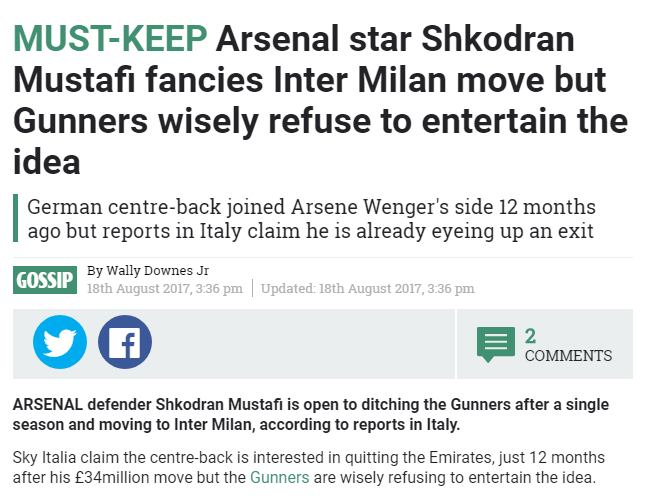 After one season at the club, he already has an FA Cup to his name while Inter have failed to win any silverware in the past six years.

With the sale of Gabriel to Valencia concluded at the end of this week, Arsenal will certainly not be looking to sell any more of their first-team defenders and it seems like this story is nothing more than some Italian naughtiness picked up and amplified by the S*n and others who love nothing more than the thought of Arsenal in turmoil.

What happened to Francis Jeffers and where is he now?