The Dutch defender’s relationship with Southampton has soured greatly this summer and is seemingly damaged beyond repair after van Dijk was forced to hand in a transfer request.

According to today’s issue of the Daily Mail, Liverpool remain van Dijk’s preferred destination despite interest from Arsenal, Chelsea and Manchester City. 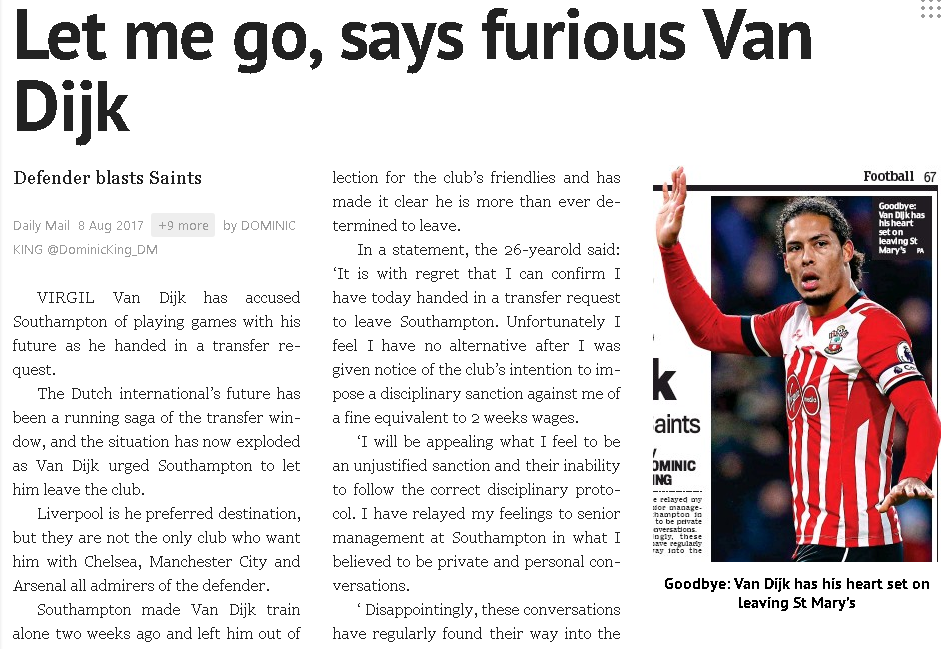 Van Dijk wanted a Liverpool move earlier this summer, and might have gotten it had Southampton not threatened to report Liverpool for tapping up. Liverpool formally dropped their interest and that appeared to be the end of it.

Since then, new Southampton manager Mauricio Pellegrino omitted van Dijk from the club’s tour of France, claiming that the defender wasn’t in the right frame of mind. Recently, van Dijk was fined for not being ready to play in the club’s friendlies, a move that has angered him.

“It is with regret that I can confirm I have today handed in a transfer request to leave Southampton,” van Dijk said in a statement.

“Unfortunately, I feel I have no alternative after I was given notice of the club’s intention to impost a disciplinary sanction against me of a fine equivalent to two week’s wages.

“I have been left frustrated by the club’s position that I am not for sale and am disappointed that enquiries from multiple top clubs have been consistently rebuffed.”

According to the Daily Mail, though, Southampton still have no intention of selling van Dijk. Arsenal could be in the market for a centre-back this summer and have been linked with the Dutchman all summer.

With Per Mertesacker retiring at the end of the season, Laurent Koscielny struggling to shake off niggling injuries and Calum Chambers being potentially sold this summer, Arsenal may need to bring a player in to challege Shkodran Mustafi, Koscielny and Rob Holding for a starting place.