Riyad Mahrez has been constantly linked with a move away from Leicester City, and Arsenal are reportedly serious contenders to sign the Algerian winger if they are unable to land Thomas Lemar .

Mahrez had a bit of a disappointing season after his marvellous title winning 2015/16 but Leicester City’s whole squad didn’t quite live up to expectations over the past 12 months.

The 26-year-old was still one of their best players, making 48 appearances over four different competitions, putting in some strong performances, scoring on 10 and assisting on seven occasions.

The Algerian international was a true revelation in England and the winger, who arrived at Leicester for €500k from Le Havre, has proven his worth and repaid every penny invested.

So what are his strengths, style, weaknesses and could he improve at Arsenal?

Riyad Mahrez is a great dribbler and has plenty of talent and skills to put even the best defenders in the world to the test. His direct approach and agility allow him to go past two or three defenders before they have the opportunity to catch up, and by the time they close on him, it’s already too late.

The playmaking winger is at his best when positioned on the right flank but he is also adapted to switching to the left and can even play as an attacking midfielder. On average, Mahrez creates 1.39 chances per game and makes 1.31 key passes with the pass completion rate of 78%, well below what would be expected at Arsenal.

The player, however, is a threat for the opposition in every part of the pitch, and he doesn’t shy away from taking chances.

He has a decent accuracy of 64% when taking a shot. He took around 1.06 shots per-game from inside the penalty box and one from outside of the area. Even though he as a preference to use his left foot, his right leg can also be very dangerous.

The Algerian also lacks physical strength and could use additional work to build up muscle mass. This doesn’t necessarily need to be presented as a weakness as the player would surely lose some of his agility if he were to “buff up”.

Can he improve Arsenal? 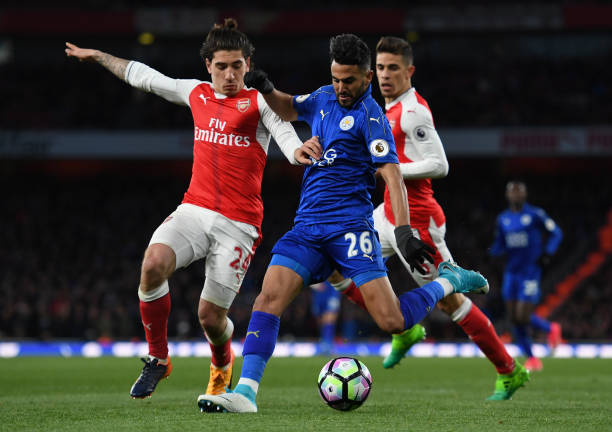 Riyad Mahrez is still the player that won the PFA Player of the Year award and has plenty of natural talent along with skills and abilities that made him a target for some of the best clubs in Europe.

Arsenal haven’t been in a comfortable position with their right wing options and the performances of Theo Walcott and Alex Oxlade-Chamberlain have often been underwhelming and lacking the conviction that they are still the right players for the club. Mahrez looks like a potential upgrade in that position.

The 26-year-old Algerian has the much needed experience of playing in the Premier League and put in very good performances in the Champions League.

He has proven his worth.