The hype around the signing of Alexandre Lacazette continues to be a source of entertainment on social media, with some fans now turning to song to express their excitement.

A good choice of song can really help the fans get behind a player. Just look at Mesut Özil. His song is so catchy that it rings round the stadium at least once or twice a match. Rob Holding has had a similar treatment recently, with the “Rob Holding, you know, he’s better than Cannavaro” chant catching on.

Whereas for a player like Mustafi, you almost never hear his name sung, just because no one has come up with a good one for him yet. So with Arsenal’s club-record signing preparing to make his debut as soon as next week in the club’s pre-season friendlies, Arsenal fans have been trying to get a song ready in time.

As the Mirror reported, Arsenal fan “@DarrenArsenal1” on Twitter tweeted out that he wanted a song to the tune of Black Lace’s “Agadoo”, and another fan was on hand to provide him with lyrics: 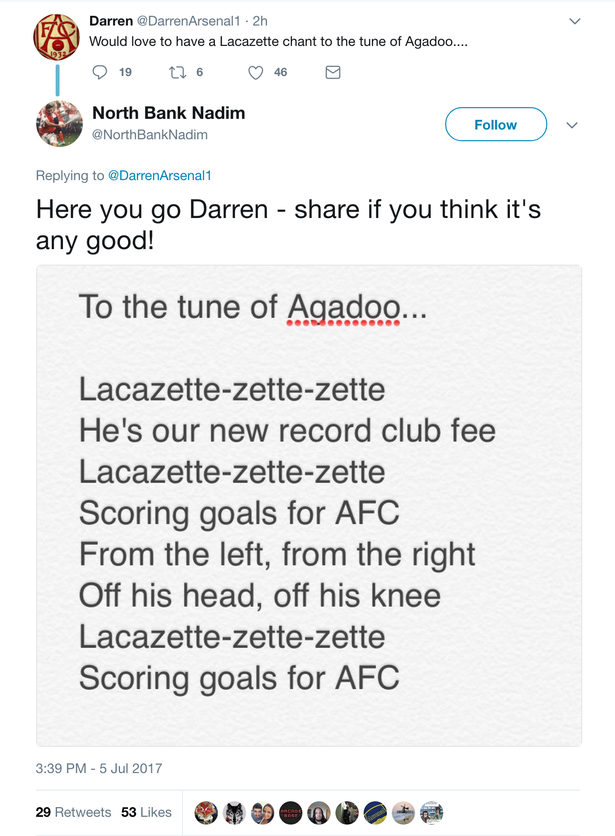 What do you think? Could you do better? Perhaps you’ve got a different idea for a song? Let us know.