Paris Saint-Germain are now reportedly after Juventus winger, Juan Cuadrado, after Arsenal were recently rumoured to have had a bid rejected.

According to Gazetta Dello Sport, PSG are ready to go up against Arsenal for Cuadrado, with Juventus apparently holding out for €30m (£26.4m) for the winger.

Arsenal were recently said to have bid £17.6m for the Colombia international, who scored three times last season, but the Gunners promptly had the bid rejected since it was far lower than the Old Lady’s valuation. 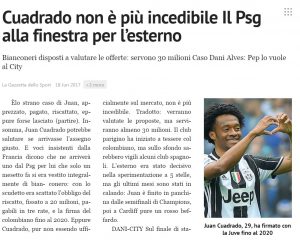 Juve are on the verge of signing the 29-year-old from Chelsea after he enjoyed two successful loan spells in Serie A. They’ve reportedly triggered a clause, which means they can sign him for €20m (£17.6m). However, they’ve allegedly already deemed him surplus to requirements and will be willing to sell should the right offer come along.