It was always reported that Arsenal were signing Sead Kolasinac as a long-term replacement for Nacho Monreal and it appears he’s the right man for the job if his stats are anything to go by.

Monreal has just two years left on his current Arsenal deal and while he finished the 2016/17 season strongly, overall, last term wasn’t the Spaniard’s best.

At the age of 31, it seems likely that Arsene Wenger, despite standing by Monreal up until this point, could be looking for a younger replacement, which he’s perhaps now found in Kolasinac.

With Athletic Bilbao reportedly set to return for Monreal, who they’ve been after since 2014, signing Kolasinac seems like a sensible long-term solution, especially when you look at his stats.

Thanks to these graphics from Kick Off, we can see that the 23-year-old, who turns 24 on 20 June, was included in 25 Bundesliga matches last season, 44% of which Schalke won with him on the pitch. They had a 67% loss rate without him and drew 33%.

With Kolasinac on the pitch, Schalke scored 37 goals, three of which were his (two with his feet, one with his head), and netted just eight when he was sidelined.

What’s even more telling is the amount of goals scored against Schalke while he was out injured. 2.1 per game compared to 0.8 with him fit and playing. 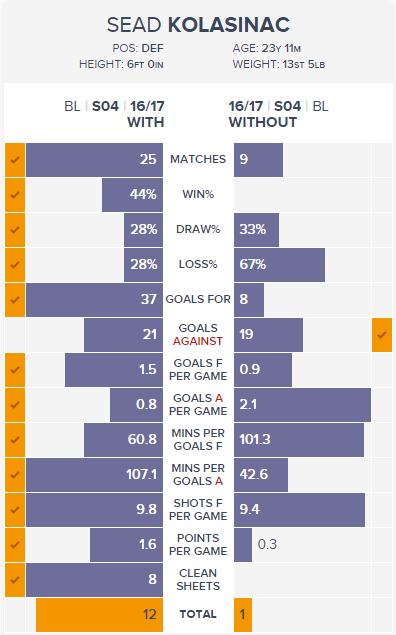 A goal was scored every 104 minutes that Kolasinac played, compared to every 73 minutes when Monreal played for Arsenal. 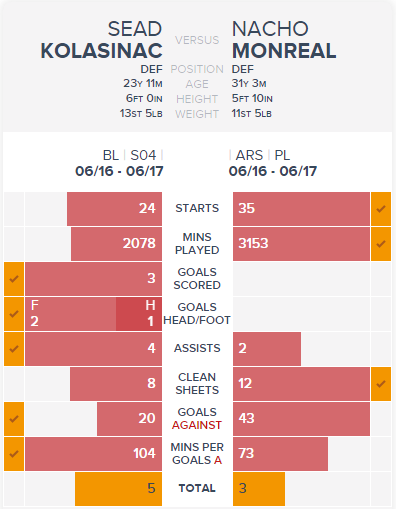 Kolasinac also racked up double the amount of assists that Monreal did, with far less playing time, helping to keep eight clean sheets in the process.

Can Arteta make it 3 in a row? Liverpool vs Arsenal head-to-head record