My life as an Arsenal fan has almost coincided perfectly with the move to The Emirates Stadium.

I was born in Highbury in the early 90s and have fond but hazy memories of going to the old ground. I remember being able to hear the wave of noise created when the Gunners scored and the sight of the emerald green pitch, illuminated by floodlights, when I was lucky enough to go to an evening game.

However, it is hard for me to claim I was really an Arsenal fan at that point in my life.

I was too young to remember the double success in 1998 and likewise in 2002. I have stronger memories of the 2004 Invincibles campaign but I certainly wasn’t old enough to appreciate what a special season that was.

I think the moment I became an Arsenal fan was the 2006 Champions League final.

That was the last game Arsenal played before the move to The Emirates.

My time as an Arsenal fan has been almost exclusively in The Emirates era.

Arguably not the greatest time to be an Arsenal fan as almost every season has ended in disappointment. However, there have certainly been some great moments.

In reverse order these are my three favourite memories from the Emirates Era. 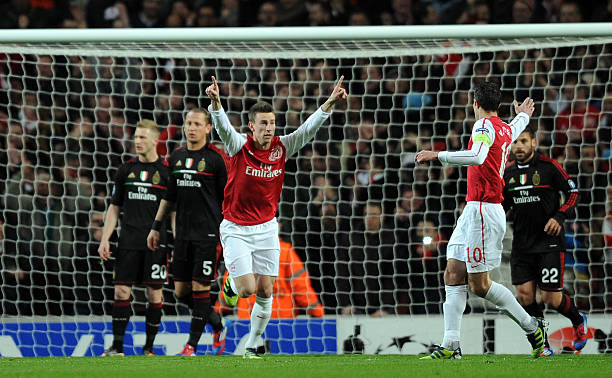 The atmosphere at The Emirates is often, and quite rightly, criticised. However, on a few nights – usually big European games – the atmosphere has been electric.

Trailing 4-0 after a insipid performance at the San Siro – in which they torn apart by Zlatan Ibrahimovic – Arsenal came roaring out of the gate and grabbed three first half goals to inspire hope of an improbable comeback.

Unfortunately, Robin van Persie missed a golden opportunity to score the crucial fourth goal and the Gunners ran out of steam in the second half. Alex Oxlade-Chamberlain produced one of his finest performances in an Arsenal shirt and had he not limped off with a hamstring injury maybe the result would have been different.

The reason this game holds such fond memories for me is not because of the result but due to the atmosphere in The Emirates.

From the kick off the stadium was a cacophony of noise and the players fed off the atmosphere and produced a blistering start. There have been very few times that The Emirates has been a genuinely hostile environment for the opposition – this was one of them.

The effect on the AC Milan players was evident too as they looked a shell of the imperious team who had destroyed Arsenal in the first leg. It was a perfect example of what a proper atmosphere can give the home team and unfortunately is something that has been lacking far too often in recent years.

The end result may have been disappointing but it was the best atmosphere I have personally experienced at The Emirates – might not say much – and for that reason it is one of my best memories of supporting Arsenal. 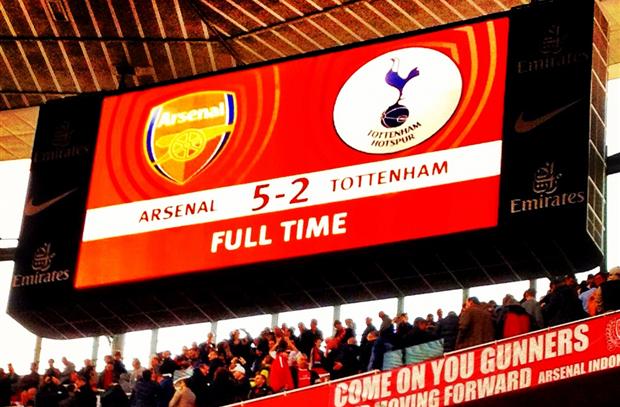 Coming just a week before the Milan game above Arsenal headed into this game in crisis.

Crashing out of the Champions League, knocked out of the FA Cup by Sunderland and trailing their North London rivals by 10 points.

Half an hour in to the game it looked as if the crisis was going to deepen as Sp*rs took a 2-0 lead via a deflected Louis Saha goal and an Adebayor penalty. From that moment on it was all Arsenal as we scored five goals in 27 minutes to claim a glorious victory.

First Bacary Sagna powered in a thumping heading and then gave an adorable interview after the game giving birth to the greatest nickname of the Emirates era – Backpack-ary. Then some cnut called Robin van Persie curled in a delightful equaliser just before the break.

Tomas Rosicky fired us ahead after half-time, following a slick move, and Theo Walcott completed the rout with a quick fire brace. The joyous occasion was capped of perfectly when Scott Parker, the greatest midfielder in the world at that time, was sent off for a second yellow.

The unbridled joy in The Emirates was something to behold. I don’t think I’ve ever hugged so many strangers and the feeling of collective ecstasy was amazing to be part of.

In what was a strange season during which we relied almost exclusively on Van Persie’s goals this was a moment of rare satisfaction.

Watching Harry Redknapp – looking like an alcoholic chipmunk who’d spent the last three days lost in Margate – give a stunned post match interview was the icing on the cake. I like to think I did Arsenal fans all over the world a great service by having university exams and not being able to go to the 2014 FA Cup final.

Arsenal have never won a cup final which I have attended. I went to the heart wrenching Liverpool defeat in 2001 and witnessed both league cup demises to Chelsea and Birmingham City. *

This Cup Final felt different though.

It was only Hull and we had been on a pretty decent run of form leading into the final. Sadly after eight minutes it all felt terrifyingly familiar. Goals from James Chester and Curtis Davis had put Hull 2-0 up and it might well have been three but for Keiran Gibbs’ goal line clearance.

There was a sense of absolute disbelief amongst the Arsenal fans I was watching the game with and I genuinely thought we were going to f**k it up again. Fortunately, Santi Cazorla produced a piece of sheer brilliance to score one of the greatest free-kicks I have ever seen and were back in it.

I think if we hadn’t responded so quickly it would have been a very different story.

Once that goal went in the momentum of the game changed very quickly and although it took until the 70th minute for Laurent Koscielny to score the second I never felt overly concerned once we had got one back.

We missed chances to seal the victory in normal time but we looked like the only team that was going to win it in the extra period.

Aaron Ramsey punctuated a brilliant personal season with the winner and despite a moment of madness from Fabianski we saw the game out comfortably to win the cup.

That day was the first time that I saw Arsenal win something as a true Arsenal fan and it was an unbelievable feeling.

United and Chelsea fans my age might scoff at the idea of being so happy to win the FA Cup but their experiences as a football fan have been very different to mine. It was a great day and definitely the best day I have had as an Arsenal fan.

I’m sure you all have different memories of the Emirates era. Thierry Henry’s last minute winner against United or the glorious 2-1 victory over Barcelona stick out as alternatives. There was also the 4-0 2015 FA Cup victory or Arshavin’s four goals at Anfield in 2009.

However, these three were the ones which have the strongest memories for me personally.

Let me know your favourite memories of the Emirates Era.

*You will be pleased to hear that I am not attending the FA Cup Final this year. You can thank me when we win.