Arsenal’s midfield outshone their United counterparts and provided the perfect platform for Sunday’s 2-0 win, which leaves Jose Mourinho still searching for his first league win at the Emirates and first win in any competition against a current Top 6 side since November 2014.

On the eve of the 15th anniversary of Arsenal winning the league at Old Trafford, a team performance driven by Patrick Vieira’s virtuoso midfield display against Roy Keane, Paul Scholes, and Juan Sebastian Veron, it was fitting that central midfield was again the battleground on which this fixture was won.

Granit Xhaka will rightly receive plaudits for his goal, but his all-round midfield performance served as a timely reminder of what Arsene Wenger saw in him that convinced him to part with £35m. He showed off an impressive range of passing, completing 70/74 passes, but we were all aware he can do that.

What was more impressive was how he played without the ball. He dropped deeper, providing additional cover for the back three when the situation required it, and an easy outball for them when they wanted to progress play through the middle, and for the wing backs when they couldn’t progress play down the flanks and wanted to knock it square.

In his 75 minutes on the pitch, he offered everything you’d want from a central midfielder asked to play his role and he did it at the highest standard. 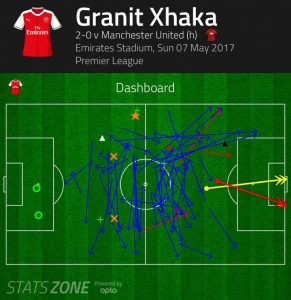 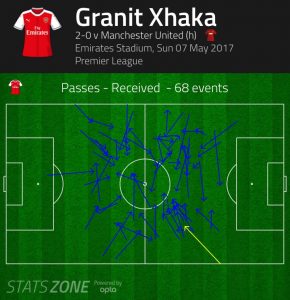 Xhaka was ably partnered by man of the match Aaron Ramsey, who turned in a complete midfield performance of his own.

When Arsenal played a 4-2-3-1 variant, Ramsey had to be more measured with the timing and frequency of his forays forward, given how high up the fullbacks played knowing that there would only be the two centre backs and the deepest midfielder behind him should Arsenal lose the ball and get hit on the counter. In the 3-4-2-1, he has at least the back three and Xhaka behind him, so can maraud forward more frequently.

It has already paid dividends.

Ramsey’s presence high up the pitch was crucial for the winner at Middlesbrough, did enough to distract Jesus Navas to make space for Nacho Monreal’s equaliser at Wembley, and he was also the only Arsenal player to get into good positions at Spurs.

In this formation, he can get forward at will, popping up in positions he can hurt the opposition from, providing his teammates are able to find him and willing to pass. 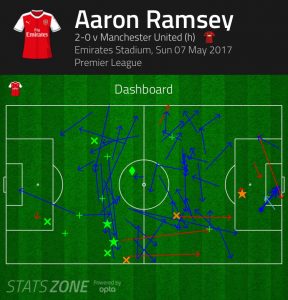 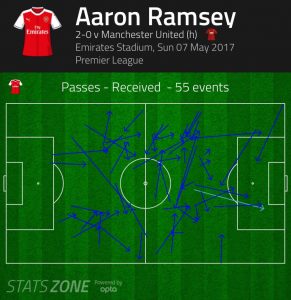 Xhaka and Ramsey ran the midfield from start to finish and United looked distinctly second best. Compare their usage of the ball and the positions they were popping up in to influence the game to what a Wayne Rooney and the much-hyped Ander Herrera could muster.

It’s night and day, men vs boys, you vs the guy she told you not to worry about. 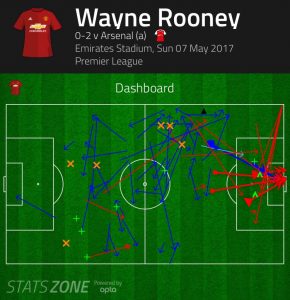 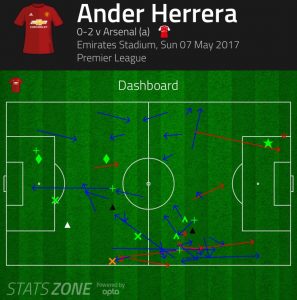 Despite all the pre-match chicanery about resting players and focusing on the Europa League, Mourinho picked an accomplished side featuring 10 full internationals.

It quickly became apparent that United and their narrow back four would be sitting back, presumably waiting for Arsenal to make a mistake on the ball, before trying to hit the hosts on the counter, like latter day Ferguson sides did.

Unlike those Ferguson teams who seemed to score that one same counter-attacking goal against Arsenal every game, Sunday’s United side looked distinctly short of pace.

Even if Arsenal were to overcommit, there weren’t any players you’d be wary of flooding forward with Anthony Martial and cutting Arsenal’s retreating defenders apart like Ronaldo and Park did.

In the first half, it was evident that United had a plan to slide their protection and allow their hosts to circulate the ball to Kieran Gibbs, the player they had identified as the Arsenal player least likely to hurt them. While he wasn’t able to play a telling pass in the final third, he engaged in some neat passes and never sapped Arsenal’s rhythm or tempo, and crucially didn’t lose the ball in dangerous areas.

The other reason why United were content to let Arsenal have possession on the left was because of a read they’d made on Alexis Sanchez and his recent performances.

Alexis is a high risk, high reward player. It’s great when it comes off, but increasingly frustrating when it doesn’t.

United were looking to let Alexis try something elaborate, then nick the ball off him and spring a counter. However, to his credit, he was more measured and assured with possession than he has been in recent weeks, and this plan could not come to fruition.

United’s only real chance came about through an unforced Arsenal error. However, Petr Cech was on hand to atone for delaying coming off the line to get down and save from Rooney at his near post. He’s been in good form since returning from his injury, arguably putting together his best run of games in an Arsenal shirt.

While they don’t control their own destiny and need help from elsewhere, Arsenal are still in with an outside shot of qualifying for next season’s Champions League after their next opponents Southampton frustrated Liverpool in Sunday’s early kick-off.

Both sides will likely rotate, which is understandable, but unlike the Leicester game, Wenger needs to make the right rotations to keep the system running smoothly.