It’s curious that the day before Arsenal attempt to resolve the manager’s contract situation, that Huddersfield Town should get promoted to the Premier League.

Whilst Huddersfield Town bear no great semblance to Arsenal, they are the club that Herbert Chapman left in order to join the Gunners in 1925.

With Wenger’s contract up for renewal, it’s interesting to compare the two great managers. Despite almost a decade between the two manager’s reigns, similarities between Chapman and Wenger are closer than many would think. There is no doubt that both are, in effect, recognised as the two greatest custodians of the club. Yet the attributes and traits that made them both successful managers are uncannily close.

Chapman as a manager was at the forefront of the game. He was one of a few who demanded total autonomy within the club, taking charge of team selection rather than allowing a board member to pick the side – as was the practice at the time. It’s not difficult to draw similarities between Chapman’s view and that of Wenger regarding the mooted Director of Football role currently being discussed. Both recognised that they would be accountable for results and performances, so to ensure they could account for their team’s performances, they would need to have total discretion.

Chapman was quick to link playing ability and fitness, demanding all his players be of the utmost physical conditioning, instituting training regimes and retaining the services of club physiotherapists and masseurs. Again not dissimilar to Wenger’s early days at Arsenal, where he made changes across the board – from the training pitch right across to the food served in the canteen. 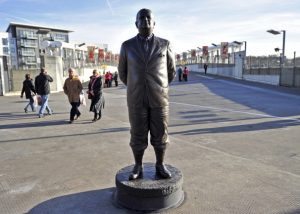 Stories have often emanated from the Arsenal changing room that Wenger encourages his players to figure out the best means of breaking an opposition down rather than lecturing them himself. Similarly, Chapman encouraged his players to discuss tactics and introduced weekly team meetings where players were urged to socialise and converse over the beautiful game.

Chapman valued the football stylings of European clubs and was one of the first to insist upon playing home and away games against their foreign counterparts. He even suggested a European competition 20 years before the first European Cup was founded.

Finally, and most fittingly, Chapman oversaw the majority of construction of Highbury in the early 1930s. Whilst Wenger will be fondly remembered for his role in The Invincible season, it was his guidance and drive that took Arsenal into the Emirates Stadium that could yet prove the most remarkable achievement in his wildly successful career.

Despite both managers being adjudged to be at the forefront of the game, many of their revolutionary ideas were closely related. After convincing Chapman to leave Huddersfield town in 1925, Arsenal grew to become one of the finest teams in the country and in 1930 won their first ever FA Cup. 13 FA Cups later, it is another man being lauded for his achievement. Congratulations to Huddersfield Town on their promotion to the Premier League.

Can the Gunners still dream of breaking into the top four?