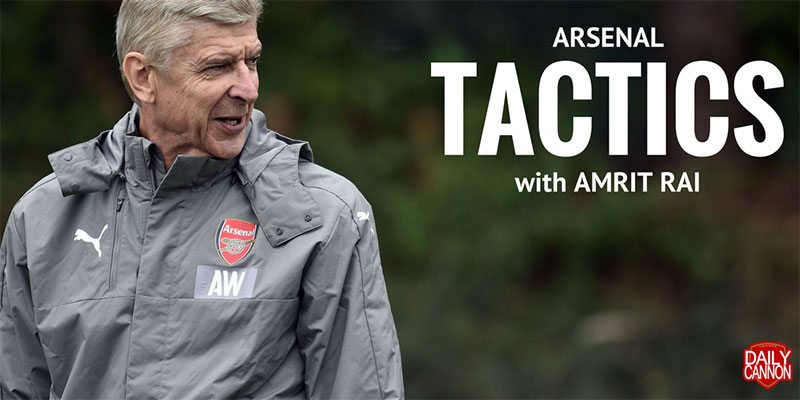 There are two schools of thought regarding Arsenal’s formation switch ahead of Monday night’s 2-1 win over Middlesbrough at the Riverside.

The first involves disregarding everything you’ve learned from the last 20 years and taking what Wenger says in press conferences and interviews at face value.

The second involves looking at Sunday’s upcoming opposition and the sides who have most troubled them this season.

Why would he change?

In an interview, Wenger disclosed that the switch to three at the back was to help deal with Middlesbrough’s more direct approach.

Following the humbling at Selhurst Park against Sam Allardyce’s Crystal Palace, one would have been inclined to take the manager at his word in adopting this reactive system with the extra centre back to help a team that’s lacked defensive structure and looked utterly bereft of confidence.

But why would Wenger adopt a reactive system against the most miserable attack in all of English league football?

Unless of course there was more to it than that.

This season, Pep Guardiola’s Manchester City have looked most vulnerable in two defeats to Chelsea, a 4-0 humbling at Everton, and in a 2-2 draw with Spurs in January, all of whom played a three-centre back system.

Arsenal have tried to stand toe-to-toe with Guardiola’s City using more conventional set-ups this season, but were unable to defeat them on either occasion.

Rather than merely going in with the same 4231 or 433 base and hoping that Guardiola gets his Wembley tactics wrong, as he often has in past Champions League knockout away games, as Arsenal themselves have twice benefited from in the past in 09/10 and 10/11, Wenger opted for a proactive strategy.

However, all strategies require testing and fine-tuning before rolling out on the big stage. And Monday night’s trip to the Riverside gave Wenger the opportunity to do that.

Arsenal started off understandably shakily, having not won an away game against league opposition since the trip to Swansea on January 14th.

There was far too much blank space between the centre backs and Arsenal looked like they could be vulnerable to direct punts up field. This was particularly ominous for a team who had conceded in this way in their last three away games.

Arsenal’s task was made all the more difficult by Alex Oxlade-Chamberlain, who was playing right wing back for the first time, losing his footing twice in the space of 10 seconds, and then picking up a deserved booking in the third minute for tripping Fabio.

This was a sink or swim moment for the Ox and could have gone horribly wrong.

However, he grew into the game and looked more defensively competent than ever, if slightly untested.

He also looked far more assured in attack and was Arsenal’s best outlet. 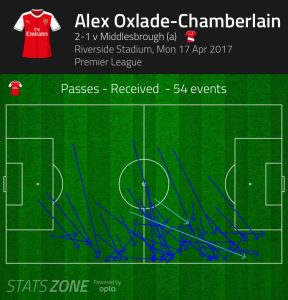 With him receiving the ball deeper than he usually does when he plays right wing, he was forced to look up more often rather than just charging forward with his head down before slinging in a speculative cross.

He was more intelligent with his usage of the ball, and despite one poor decision late on when he shot into the sidenetting rather than looking up and squaring, gave his most complete performance of the season.

There is still scope for improvement, but there is definitely a player in there.

Inside the Ox, the midfield was superbly controlled by Granit Xhaka and Aaron Ramsey.

They did all you’d want of a midfield pair in this formation.

They were astute with their positioning, measured in their usage of the ball, and excellent defensively, not allowing any notable Boro chances through the middle. 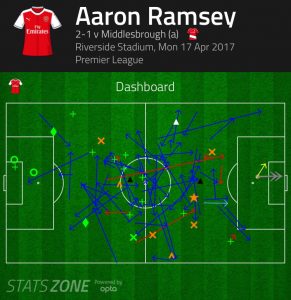 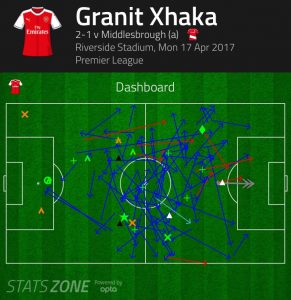 Mesut Özil’s winner came about as a result of one of Ramsey’s best qualities.

Even though things weren’t going entirely as hoped for him, he stepped up and took a risk, as he had done at Preston. He committed to the forward run and took the decision to trap the ball with his chest, which was entirely the correct play, but a high risk, high reward action.

The embodiment of high risk, high reward in this Arsenal team is Alexis Sanchez.

He scored the first from a free kick that Brad Guzan definitely should have done better with, but was then responsible for setting up Middlesbrough’s equaliser, before atoning with the ball to Ramsey, leading to Özil’s winner.

The frustration with Alexis comes due to the repeated nature of his risk-taking coming off.

When he plays from the left, he is always inclined to dribble a bit before cutting inside and looking to play square.

It’s not just that he’s making mistakes, but that he’s consistently making the same one and it’s increasingly predictable what he’s going to do. 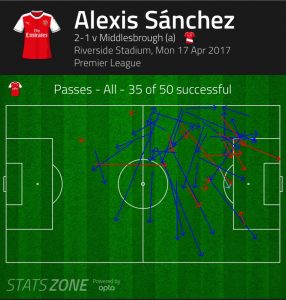 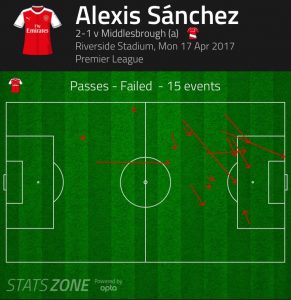 Middlesbrough were ready for the Chilean to play like this and did well cutting out some of his square balls.

This is how they regained possession ahead of the equaliser.

What makes Sanchez’s cavalier usage of the ball more risky is that he invites Nacho Monreal to commit 30 yards on an overlapping run. When Sanchez ignores the fullback and gives the ball away, Monreal often has to make up 60 yards on the sprint to shut down an attack.

Regardless of what you think about the fullback’s decline this season, it’s indisputable that he’s being hung out to dry by negligent widemen.

While it wasn’t a vintage performance, the win at the Riverside will shake some of the cobwebs and may convince some of the Arsenal players and fans alike that they have a fighting chance at Wembley, so long as they don’t engage in self-sabotage.