A gameplan, no matter how elaborate or simple, stringent or fluid, can only be as effective as the players tasked with implementing it.

At Selhurst Park, every Arsenal player failed to hit the heights expected of them, and the visitors were routinely beaten 3-0 by relegation-threatened Crystal Palace who had nine players out through injury.

Palace set up exactly as expected.

They defended deep, preventing Arsenal from getting central penetration and playing through balls into the box. They happily ceded the flanks, confident in their ability to crowd out Danny Welbeck and cut out any attempted crosses. Arsenal were only able to find their striker 13 times throughout the match, mainly in innocuous positions, and only twice inside the box. 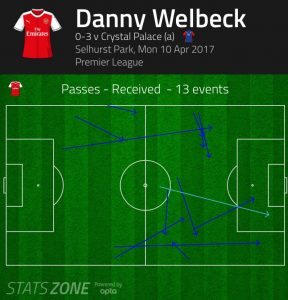 Palace’s shielding midfield players were also attentive in their defensive duties and positioned well enough to scupper cutback attempts intended for Arsenal’s midfield runners. The hosts were able to settle into their shell and Arsenal didn’t do enough to crack them.

In attack, the hosts eschewed conventional build-up play and instead went long to Christian Benteke, looking to win the second ball, before working it wide and trying to deliver the ball into the box. This is exactly how the first goal came about.

After an impressive showing against Manchester City’s ground attack and an uneventful showing against a West Ham team who failed to play to Andy Carroll’s strengths, Gabriel again looked as lost in the air as he had at Upton Park last season when Carroll scored a hat-trick. Benteke easily had the beating of him for the first goal, and him having moved to contest the header left a sizeable gap in the Arsenal defence, giving Palace a 3vs3 opportunity, which they were able to exploit for the game’s opening goal.

Against Palace’s deep defensive block, Arsenal’s fullbacks were always going to be the spare men and most valuable weapons in getting behind with late runs untracked by Palace’s wingers. 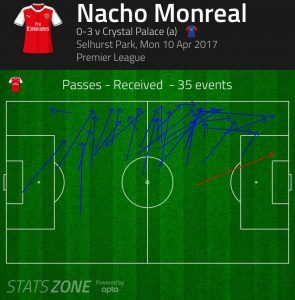 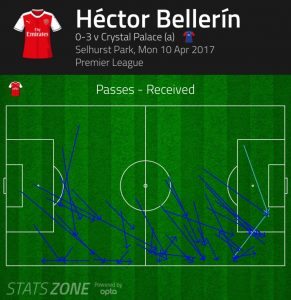 As you can see, the fullbacks were often spare and received the ball in dangerous positions, but Bellerin was unable to offer much with it. Palace congested the box, making crosses an even lower percentage play than usual, and Arsenal’s wide forwards were unable to engage in effective enough associative play with the fullbacks in order to manipulate Palace’s mass of humanity and forge an opening. 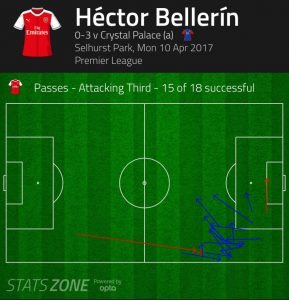 Although Arsenal weren’t able to generate situational overloads in wide areas as they had against West Ham, the associative play down the left looked their best bet for creating opportunities from open play. You got the sense that if Arsenal were going to get back into the game without Palace gifting them a goal through an unforced error, it was going to come through Nacho Monreal, Mesut Özil, and Alexis Sanchez working down the left.

For the third match in a row, this trio looked Arsenal’s most dangerous weapon.

However, as the match went on, Monreal continued to do his duty and commit to making these runs, but Alexis was increasingly ignoring him, choosing to cut inside instead. The combination of Alexis’ predictable play and Palace being perfectly set up to deal with it became exponentially more frustrating viewing on each subsequent attempt. 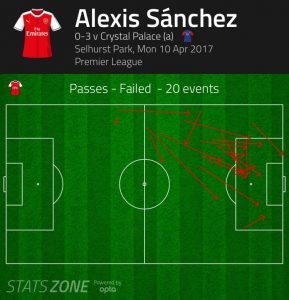 Monreal would sprint 20 yards untracked into a threatening position, only for Alexis to ignore him, cut inside and give the ball away, leaving a massive gap for Palace to target when they countered. Observers were more inclined to criticise the Spaniard for being so far upfield, rather than Alexis for encouraging him to make the run, neglecting to use him, and then losing the ball trying something that absolutely wasn’t on when he had the easy option outside him.

The most worrying thing about Arsenal’s performance at Palace was that this looked a team utterly bereft of confidence and form for the first hour, and then lacking in desire to do anything about their predicament thereafter.

The players selected are more than good enough to defeat their Palace counterparts if they play to the best of their ability, and maybe still even if they were operating at 70%.

But they didn’t even manage that.

‘Desire’ is an often used buzzword in football circles, which has become increasingly meaningless due to its total subjectivity. After going 2-0 down, every Arsenal player lacked the desire, in the truest sense of the word, to do something tangible to drag their team back into the game.

Regardless of the recent results, these are good players, who will have no shortage of suitors should they decide they’ve had enough at Arsenal and would like to go elsewhere in the summer. However, the players also know that Arsene Wenger isn’t the sort of manager who would publicly call them out for their poor performances, even when it is fully warranted.

There’s no accountability for their performances. They know they can get away with this level of performance with their reputations publicly intact.

It would be remiss to think the players are deliberately downing tools to get rid of a manager they dislike, as Chelsea did Mourinho last season, as no other manager would offer them the protection and relatively easy ride Wenger does. However, their desire to turn things around at Arsenal can 100% be called into question.

Fans would like to think that players join a club and grow to love the club the same way they do. That they have the exact same level of emotional investment.

With the majority of players, this isn’t the case.

Top level players are fierce competitors, who love winning, and a club is merely their vehicle for getting their fix. When the club stops satisfying that itch for winning, some players dig in and work that bit harder to get back to winning ways at their club.

Others mentally check out, safe in the knowledge that their agent can get them out of there.