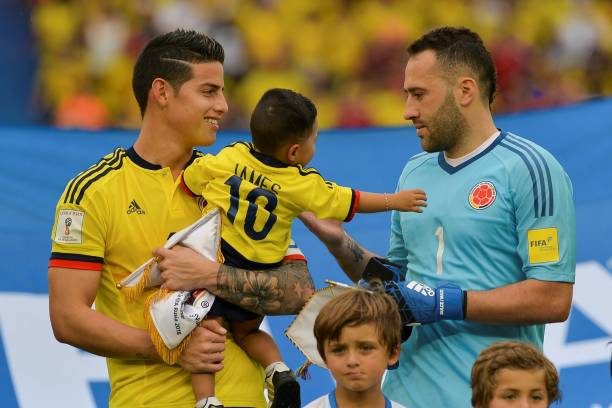 According to reports, James Rodriguez will not be joining Arsenal this summer because of David Ospina.

The Real Madrid star is clearly unhappy with his treatment from Zinedine Zidane, as the Colombian doesn’t get nearly enough game time as he would like. It seems certain that he will leave this summer and Arsenal have been one of a few clubs linked.

Don Balon, however, claim that Arsenal won’t be signing the 25-year-old, and the main reason for this is the decision from Arsene Wenger to sell David Ospina – James’ brother-in-law.

With Ospina seemingly on the way to join Turkish side Fenerbahce, reports now say there is little-to-no chance that Rodriguez will come to the Emirates.

Ospina has reportedly been a major influence in efforts to lure the Colombian to the Emirates due to him marrying Dave’s sister.

Florentino Perez and Zinedine Zidane are both determined to sell Rodriguez, more so after a series of poor performances, and are encouraging buyers to step forward.

James is a professional football player. He’s unhappy at Real Madrid because he doesn’t play as much as he wants. For a player close to his prime that is torture.

Arsenal are in need of a player of his qualities, and offering him first team football surely means far more in any negotiations than his brother-in-law (who isn’t even playing that much of a role at the club) leaving for Turkey.

At the end of the day, if James truly is a professional and wants to play week-in week-out, there is better chance of that in the current Arsenal squad than at Manchester United.

In my opinion, any reports suggesting that a player would join a club only for money/family/whatever reason instead of the potential to play and develop themselves as professional says a lot more about journalists who make up these kinds of stories up than of the players, most of whom play the game because of their passion and love – not for personal reasons or financial benefits.

If a player is willing to join Arsenal, there won’t be any obstacles in his path, not even if their brother-in-law decides to move away from the club.