It was a frustrating evening for Theo Walcott against Leicester City on his return to the starting lineup.

Starting ahead of Olivier Giroud and Danny Welbeck in attack, the 28-year-old was expected to stretch the Foxes’ backline and create goal-scoring opportunities, two things he struggled to do all evening.

When he did get himself into good goal-scoring opportunities, it seemed like the match was being played too fast for him. Hesitant and overly cautious, he was keen to keep the ball and often opted to passed instead of create space for himself or team-mates to test Kasper Schmeichel in goal.

Alexis lost the ball with frustrating regularity on an evening where nothing seemed to be going right for the Gunners. Mesut Özil completed four key passes but none of those turned into goals. The bulk of Arsenal’s attacks came down the right with Hector Bellerín heavily involved.

This made Walcott’s performance all the more confusing.

Despite initiating a high press in the early exchanges, his intensity decreased and it appeared was avoiding receiving the ball as the game wore on.

Trying to split the centre-backs of Huth and Benalouane, it was clear that the team’s collective lack of confidence hurt their conviction when attacking. Instead of sharp one-twos to drag Leicester’s defence out, Arsenal would continue passing the ball around slowly.

Walcott had 38 touches during the 74 minutes he featured, the fewest of any starting outfield player for Arsenal. He made 18 passes.

His one notable contribution came just before the half-hour mark.

At the end of a patient move, he showed good composure to flick the ball over Fuchs’ attempted tackle and strike goalwards, but his shot lacked power and enough direction to break the deadlock, allowing Schmeichel to make a diving save.

Notable moments were frustratingly infrequent for Walcott but this was partly down to how Arsenal played as well. An overload down the wings, with well-worked passing moves favoured Giroud or Welbeck as the central striker.

As you can see from his player dashboard from Four Four Two, the majority of his unsuccessful passes were on the edge of the area. 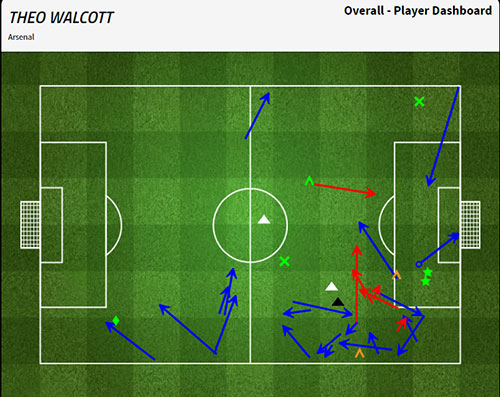 Naturally, his decision-making resulted in widespread groans across the Emirates and although he did get into promising positions at times, he struggled to make them count.