Somehow, everyone knew that it was always going to be Alexis Sanchez that scored the winner to put Arsenal through to the FA Cup final against Chelsea.

Despite the Chilean having a relatively quiet game overall, he stepped up, as big players do, in extra time against Manchester City to put the Gunners 2-1 ahead.

Although City had a couple of near-misses, Arsenal held onto their lead for the 20 minutes remaining and now go through to the final.

Unlike the rest of the players on the pitch, apart from perhaps Alex Oxlade-Chamberlain, Alexis seemed full of energy in extra time, with his WhoScored.com rating shooting up from 6.83 to 7.77 in the 101st minute and creeping up steadily from there to reach 8.1.

The 28-year-old wasn’t in the thick of it up until this point, which was demonstrated by the fact that he only had one shot all game – his goal.

He had a pass success rate of 71%, just below his league average of 73%, completed two out of two successful dribbles, won one aerial duel, as well as two tackles, and was dispossessed once. 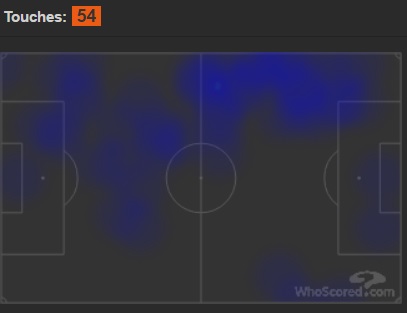 As you can tell from his heatmap, he was all over that left-hand side. Although he was also helping out at the back considering Arsenal were defending for their lives during the first half and late in extra time.

Alexis is now Arsenal’s all-time top goalscorer at Wembley (4), and has scored 39 goals in 42 appearances this season.

Stats via Squawka and Who Scored.

Which game will Gabriel Magalhaes miss through suspension?